Westinghouse VVER-1000 fuel has been loaded into Temelín 1 for the first time in almost a decade. Jan Höglund and Ulf Benjaminsson introduce the latest design. In April 2019, six lead test assemblies were loaded in Temelín unit 1. They were Robust Westinghouse Fuel Assembly-Temelín (RWFA-T) assemblies, designed specifically for CEZ’s VVER-1000 at Temelín and they marked nine years since the company’s most recent fuel delivery to Temelín, in 2010.

These VVER-1000 RWFA-T LTAs are based on Westinghouse’s RWFA design, with modifications made for compatibility with the TVSA-T resident fuel to address lessons learned. Westinghouse has evolved its VVER-1000 fuel design and gained significant experience in Ukraine’s VVER-1000 reactors. This led to the latest proven RWFA design and its use to diversify CEZ’s fuel supply, making supply more secure.

Westinghouse was the first fuel supplier to Temelín 1 and 2 and delivered the initial cores for both units, which went critical in 2000 and 2002, respectively. The initial cores were followed by 15 consecutive reload deliveries.

In 2016, CEZ, its technical support organisations ÚJV Rež and Škoda JS, and Westinghouse initiated the project to develop a 13-grid VVER-1000 fuel assembly for Temelín. The new fuel assembly, RWFA-T, is an evolutionary development of the RWFA design, with 13 grids instead of 16 grids. It had to be compatible with the fresh fuel storage, handling tools, reactor internals, refuelling machine, spent fuel pools, operation of the plant and the resident eight-grid competitor fuel design (TVSA-T). Using open source data, the project also targeted and achieves mechanical compatibility with a future 12-grid competitor fuel design, TVSA-12.

RWFA-T was loaded in a Westinghouse-established fuel loading sequence that has proven effective in avoiding mechanical interference during the loading and unloading of fuel. The grid material was changed to Zr-1%Nb, which had been used for the original Westinghouse fuel assembly design due to its low neutron absorption properties, but had been replaced with Alloy 718 for increased strength.

The RWFA-T design also uses grids with mixing vanes for improved thermal performance, which contributes to better fuel utilisation, as it enables the fuel assembly to operate at higher power. During the grid development process, Westinghouse used its experience from different PWR and VVER designs to develop these specific vaned grids.

Other important design differences between the RWFA and RWFA-T fuel are changing the cladding material from Zirlo® to Optimized Zirlo™ and increasing the length of the pellet stack from 3530mm to 3650mm.

The RWFA-T development process included mechanical and thermal hydraulic tests of the spacer grids and the fuel assembly. This test programme was conducted at the fuel laboratory in Westinghouse’s Columbia fuel fabrication plant in South Carolina, USA. As part of Westinghouse’s standard test programme, the grids were tested for crush strength and support feature capabilities. The skeleton and fuel assembly were subjected to mechanical tests to obtain the lateral, axial and torsional characteristics needed for the safety analysis and verification of load distribution on the guide thimbles and fuel rod drag. The thermal hydraulic test programme included pressure drop and long-term fretting wear tests.

In addition to the regular pressure drop test in the Westinghouse laboratory, a benchmark test was carried out in the Škoda loop in Plzen, Czech Republic. As part of the development programme of the original VVantage 6 fuel design for Temelín, Westinghouse conducted several pressure drop tests. These tests were performed in both the Škoda loop and in the Westinghouse’s Columbia Fuel Assembly Compatibility Test System (FACTS) loops, and were used to develop a methodology that ensures similar component loss coefficients between the two loops. For example, the similarity of the hydraulic resistance of the grids, the top and bottom nozzles, and the pressure loss from rod friction could be verified between the two different fuel designs.

The purpose of a lead test assembly (LTA) programme is not only to show the operational experience of the new fuel design but also to allow experience to be gained on a smaller scale than the full reload with the applicable licensing requirements, including licensing for the fuel transport container. The LTA programme is also the opportunity to establish the necessary manufacturing capabilities, transport routes and fuel handling routines.

CEZ, its technical support organisations (ÚJV Rež and Škoda JS) and Westinghouse split the licence analysis scope. This approach has been successfully used in several licensing projects for Westinghouse fuel in Europe.

Since an LTA batch for a VVER core typically contains only six fuel assemblies, fuel licensing of an LTA programme can be further limited in scope. Through fuel rod design, thermal-hydraulic and nuclear design calculations, it can be demonstrated that the LTAs meet the applicable acceptance criteria for design-basis events, are not limiting, do not significantly impact the core characteristics such as the range of reactivity coefficients and do not adversely affect the resident fuel.

During the Temelín LTA project, Westinghouse carried out the licensing scope for the mechanical design, fuel rod design and thermal-hydraulic design of RWFA-T; CEZ, ÚJV Rež and Škoda JS were responsible for the nuclear and core designs, safety evaluations, criticality and radiology. Successful implementation and control of this approach was achieved throughout the project with bi-weekly follow-up meetings and technical exchange meetings that also included the Czech regulator, SÚJB.

Westinghouse manufactured the LTAs for Temelín at its fuel fabrication plant in Västerås, Sweden, with the spacer grids supplied from Westinghouse’s Columbia facility. The company has made substantial investments in the Västerås facility to increase manufacturing capacity. It has expanded the spacer grid manufacturing capability in the Columbia facility to better accommodate the increased number of VVER-1000 fuel reloads it has delivered in recent years. The upgrades at Västerås include new fuel rod loading equipment and an expanded fuel assembly storage area.

For the RWFA-T fuel design, Westinghouse made additional changes at both facilities to accommodate the reduced number of grids and the introduction of vaned grids.

When entering a new market, the container to be used for transporting the new fuel must be licensed and certified with the regulator.

A transport route must be established and the appropriate approvals gained to transport the fuel through various countries along the route.

Together with CEZ, Westinghouse worked with the regulator to license and certify its Traveller fresh fuel shipping package. Westinghouse established the transport route and the regulators of Sweden, Germany and the Czech Republic approved it. Procedures and trained customer personnel have been embedded at Temelin for the Traveller container and fuel handling.

Testing the RWFA-T fuel assemblies will provide CEZ with operational performance knowledge that can aid in decision-making concerning future reloads. The LTAs will remain in the core for up to four cycles and post-irradiation examinations will be conducted after each cycle. 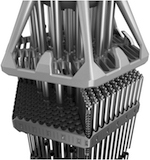