The world’s first prototype nuclear reactor to be driven by a particle accelerator took a step towards realization in 2013, with the signature of a major contract for front-end engineering and design work.

For the last 15 years researchers at the Belgian nuclear research centre, SCK-CEN, and elsewhere in Europe have been working towards a vision for the next generation of nuclear research reactor.

One result is the Multi-purpose hYbrid Research Reactor for High-tech Applications, or MYRRHA, being designed for construction at the SCK-CEN site in Mol, Belgium within the next decade. The system consists of a proton accelerator that delivers a beam to a spallation target, which in turn couples to a subcritical lead-bismuth cooled fast reactor.

The Belgian government is proposing to contribute 40% of the almost EUR 1 billion MYRRHA project cost (in 2009 EUR), and will decided whether or not to proceed with the project in 2014/2015.

The MYRRHA facility will:

Late 2013 saw two significant developments in relation to the MYRRHA project: the award of a front-end design contract and an agreement with the CERN, operator of the world's largest particle accelerator, to cooperate in the development of high-intensity accelerators for the production of radioisotopes.

However, obstacles still remain. SCK-CEN says there are three 'specific challenges' that need to be overcome to ensure a favourable light is cast on MYRRHA in an interim review by the Belgian government in 2014/2015, namely:

The MYRRHA project requires an estimated investment of EUR 960 million (in 2009 EUR), spread over a period of 14 years. This will be divided as follows: EUR 196 million for buildings; EUR 370 million for equipment; EUR 202 million for engineering, with a EUR 196 million contingency fund. This preliminary costing will be reevaluated at the end of the FEED phase (late 2015).

Given the innovative nature of the project there is a risk that the cost and time to complete MYRRHA could exceed these 2009 cost estimates. Belgium, as the host country is providing a 40% share of MYRRHA funding. It comprises investment of EUR 60 million for an initial phase of work spanning the period 2010-2014, along with contributions of EUR 36 million a year from 2015-2024.

"Given the innovative nature of the project there is a risk that the cost and time to complete MYRRHA could exceed 2009 cost estimates."

Half of the Belgian investment is borne by the Ministry of Climate & Energy, with the other half from the Ministry of Science Policy. Funds arising from the budget of SCK-CEN will also be matched by the same annual amount from the European Commission through R&D projects of the executive programme, SCK-CEN said.

The project needs to secure financing commitments from international partners (governmental or private) for a second 40%.The remaining 20% of funding can be sourced later through new partners or European Investment Bank (EIB) loans.

At the end of 2011, SCK-CEN held a first round of discussions with about twenty unnamed countries interested in participating in the MYRRHA project. The project team has retained a dozen countries on the basis of strategic, scientific and economic-financial criteria.

Collaborators in MYRRHA are expected to include major European partners, a major Asian stakeholder, as well as the European Union (with funding via the EU FP7/SET-Plan/Fusion). Participation from the rest of the world is also expected. SCK-CEN aims to finalise the legal framework of the MYRRHA consortium by mid 2014. Expressions of Interest have been received from Japan, South Korea, China, UK, Germany, France, Italy, Spain and the EU.

Operation of MYRRHA over the 30-year period spanning 2024-2054 is expected to pay for itself. Annual costs are estimated at around EUR 61 million a year. Around three quarters of this relates to operational costs, with the remaining EUR 15 million for staffing. Revenues are expected to meet, if not exceed this amount.

In October, after a two-year selection process, SCK-CEN awarded an international consortium a EUR 24 million ($32 million) contract for the Front End Engineering Design (FEED) of the MYRRHA infrastructure.

"The design of the reactor itself has been carried out by our own team," explains Hamid Aït Abderrahim, director of the MYRRHA project. "But, of course, a reactor cannot work by itself. This FEED contract will cover everything that is not part of the SCK-CEN specializations."

Design of 'everything else' is the responsibility of a team comprising AREVA TA (France) with subcontractor Grontmij (Belgium), Ansaldo Nucleare (Italy) and Empresarios Agrupados (Spain).Their role is to design the buildings, cooling systems and instrumentation and control for the reactor and the particle accelerator. The consortium is also responsible for estimating the investment and operation costs for the reactor, validation of performance objectives, preparation for obtaining an operating licence and the definition of a detailed project schedule.

"To reduce costs and facilitate the construction process, the LINAC tunnel is to be built at ground level"

To reduce costs and facilitate the construction process, the LINAC tunnel is to be built at ground level, and covered by a seven-metre-thick layer of sand to enhance radiological protection. The reactor vessel will be installed below ground in a 38-metre tall, 89-metre-long reactor hall. The remaining buildings on site will all be at ground level.

The reactor hall will contain two dedicated airlocks; one for equipment and another for bringing in fresh fuel, taking out waste, spent fuel and experiments. It has also been designed to take into account the removable vacuum line, which connects the accelerator to the reactor.

The unique and innovative concept of MYRRHA is based on a sub-critical reactor principle. This enables better control and monitoring of the chain reactions in a reactor that is heavily loaded with minor actinides, such as neptunium, americium and curium.

The accelerator provides the high-energy protons that are used in the spallation target to create neutrons, which in turn feed the subcritical core. In the current design of MYRRHA, the machine must be able to provide a proton beam with energy of 600 MeV and an average beam current of 3.2 mA. The beam is delivered to the core in continuous wave mode. Once a second, the beam is shut-off for 200 µs so that accurate on-line measurements and monitoring of the sub-criticality of the reactor can take place.

One of the main challenges when it comes to the design of the accelerator relates to reliability and availability. The number of beam interruptions longer than three seconds' duration needs to be minimized as frequent interruptions could induce high thermal stresses and fatigue on the reactor structures, the beam target or fuel elements. There is also potential for significant damage, especially to the fuel cladding.

Since the very beginning of the MYRRHA project SCK-CEN has established a solid European collaboration dedicated to the development of the MYRRHA accelerator. Working with IBA, Ion Beam Applications (Belgium); CNRS, the French National Centre for Scientific Research; CEA, the French Alternative Energies and Atomic Energy Commission; INFN, the National Institute of Nuclear Physics (Italy) and IAP, Frankfurt University (Germany), SCK-CEN has established a specific R&D programme aimed at improving the reliability of the accelerator. The objective is to achieve less than 10 beam trips exceeding three seconds per three-month operating cycle.

In October 2013, SCK-CEN and CERN, the European Organization for Nuclear Research, signed an agreement to cooperate in the development of high-intensity particle accelerators for the production of radioisotopes. They are to share knowledge and experience in the area of research into high-intensity linear accelerators and the development of high-capacity targets for the production of high-energy neutrons and radioisotopes. They will also exchange researchers, and SCK-CEN will be able to make use of CERN's infrastructure.

MYRRHA is a pool-type accelerator driven system with a reactor power ranging from 65MWt to a maximum of 100MWt. The reactor vessel houses all of the primary components, and is closed by a reactor cover.

By using fast neutrons, the uranium in the reactor will be used much more efficiently, thereby generating considerably less nuclear waste. In addition, MYRRHA will be used to demonstrate the technical feasibility of processing most of the radiotoxic minor actinides (neptunium, americium and eventually curium) through transmutation. Transmutation is a fission process that can incinerate minor actinides or long-lived nuclear waste, or can convert this waste into fission products with significantly reduced radiotoxicity.

The core design will be a scaled-up version of the MYRRHA-XT/ADS design that was developed during the EUROTRANS project (2006-2010), co-funded by the European Union in its 6th Framework Programme. The design, dubbed MYRRHA-FASTEF, is now being developed as part of the Collaborative Project CDT (FP-7).

Within the reactor vessel, the core is held in place by support structure, including a core barrel and core support plate. The core itself consists of 151 positions, with 37 positions are available for multi-functional channels (MFC); see Figure 4.

Seven central in-pile test sections (IPS), along with six control rods and three scram rods, are loaded from the top of the reactor vessel. The control rods are buoyancy-driven in LBE, while the scram rods are gravity-driven.

In subcritical mode the spallation target assembly, located in the central position of the core, brings the proton beam via the beam tube into the central core region. The six control rods and three scram rods will also be replaced by absorbing devices.

"The primary pumps, fixed to the top of the reactor cover, will deliver eutectic lead bismuth coolant to the core"

The primary cooling system consists of two pumps and four primary heat exchangers (see Figure 3). The primary pumps, fixed to the top of the reactor cover, will deliver eutectic lead bismuth coolant to the core at a rate of 4750 kg/s. A secondary water cooling system and a tertiary air cooling system function in active mode during normal operation and in passive mode in emergency conditions for decay heat removal.

The main thermal connection between the primary and secondary cooling systems is provided by four shell-and-tube, single-pass and counter-current heat exchangers. Pressurised water (1.6 MPa) at 200°C is used as secondary coolant, flowing through the feedwater pipe in the centre of the PHX to the lower dome. All the walls separating the LBE and water plena (feed-water tube, lower dome and upper annular space) are double-walled to avoid pre-heating of the secondary coolant and to prevent water leaking in the LBE in case of tube failure.

All the components have been optimized for extensive use of remote handing during replacement, inspection and handling, according to SCK-CEN. For instance, two fuel-handling machines will be located on opposite sides of the core. Each machine will be based on the well-known fast reactor technology of the 'rotating plug' concept, using selective compliant assembly robot arm (SCARA) robots. The in-vessel fuel-handling machine will also perform in-vessel inspection.

The front-end design phase of the project is expected to last around two years. It was originally scheduled for 2012-2014, but the contract has been delayed by nearly 18 months due to the public tendering process. This delay is only expected to impact the planning stage. Start-up of MYRRHA is still expected before 2026 when BR2 is due to cease operation. At the end of the FEED phase SCK-CEN hopes to have detailed specifications so the different procurement packages of the facility can be written. The first contracts for MYRRHA components could to be concluded around 2017, according to a SCK-CEN schedule. Construction could start in 2022, with commissioning the following year, and MYRRHA entering full operation by 2025. A 30-year period of operation is envisaged.

Figure 1: How MYRRHA might look (Source: SCK•CEN, used with permission) 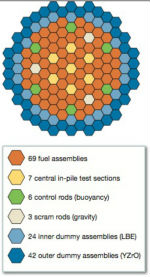