Mateusz Pater, Esben Bryndt Klinkby and Daniel Cooper provide an introduction to the Compact Molten Salt Reactor (CMSR) being developed by Seaborg Technologies. It is a thermal spectrum reactor employing molten uranium-based fluoride salt as fuel and primary coolant, with the distinguishing feature that molten NaOH is the proposed moderator.

Seaborg’s mission is to supply clean and cost-competitive power worldwide on serially-produced, modular floating power barges, to support countries with growing energy markets which are not able to rely solely on renewable energy.

With one CMSR delivering 100MWe or 250MWth power, the concept can be regarded as small modular reactor technology, which allows rapid deployment, lower capital cost, and increased siting possibilities. The power barge design is scalable and enables configurations with between two to eight active CMSRs, delivering up to 800MWe or 2000MWth.

The company’s headcount, which is now at almost 80, has been increasing rapidly since 2020 when the American Bureau of Shipping (ABS) granted a Feasibility Statement for the technology. The subsequent funding round and headcount increase has significantly accelerated the CMSR design efforts and experimental campaigns. Seaborg continues to recruit and build new experimental facilities to deliver on our ambitious plan to begin commercial operations in 2026.

Since 2020 Seaborg has been working on the conceptual design of the CMSR which, once finalised, will constitute the next maturity level of the technology.

The CMSR is a thermal spectrum nuclear reactor with uranium-based fuel also functioning as the primary coolant. The distinguishing feature of the reactor is the use of a proprietary liquid moderator – molten sodium hydroxide (NaOH). The use of molten sodium hydroxide, in conjunction with advanced materials and corrosion control methods, enables a 12-year lifetime for a single CMSR.

The CMSR is composed of several systems with their respective subsystems. The central component of the CMSR, where the chain reaction takes place, is the reactor core, which is encapsulated by a reactor core vessel. The fluoride fuel salt is circulated through a series of fuel tubes located inside the reactor core. These fuel tubes separate the fuel salt from the molten sodium hydroxide moderator. A key component of the fuel salt circuit is the chemistry control unit, which both controls the corrosivity of the salt and extracts noble gases produced by fission. The fuel salt is pumped into a primary heat exchanger where it transfers heat to the secondary salt. The secondary salt transfers heat to high pressure water via a steam generator, and the resulting steam powers a conventional turbine to produce electricity. Heat from the CMSR can also be utilised directly for applications other than electricity generation, such as synthetic fuel production.

Seaborg’s design relies on inherent safety where possible. The CMSR is walk-away safe due to, among other characteristics, negative temperature coefficients of reactivity, chemical retention of the radioactive material in the fluoride salt, large margin to boiling of the fuel, and online removal of gaseous fission products.

The main engineered safety feature of the CMSR is the drain tank located below the reactor core. In case of abnormal operating conditions or an accident, drain valves open and the fuel salt is transferred to a specifically designed vessel, which terminates the chain reaction and allows radioactivity levels to decrease and residual heat to be extracted. Both active and passive cooling methods can be used to remove the residual heat generated from radioactive decay.

After 24 years of operation, the power barge is transported to a decommissioning facility, and the power plant site returned to its original state. Decommissioning of the CMSR is thus significantly simpler than for conventional nuclear reactors.

Seaborg’s long-term goal is to reprocess and recycle the used fuel salt to minimise the waste footprint, with the potential of limiting the lifetime of waste to roughly 300 years. All waste streams can and will be handled within existing nuclear decommissioning frameworks. The nuclear waste is stable as it is contained within the fluoride salt. The modules constituting the power barge are constructed in such a way that only the reactor unit and the shielding are radioactive. The rest of the power plant can be decommissioned as any other non-nuclear power plant.

Molten Salt Reactors (MSRs) are not a new concept. They were first developed and investigated in the 1950s and 1960s at Oak Ridge National Laboratory in the USA and the resulting Molten Salt Reactor Experiment (MSRE) has been an inspiration and source of knowledge for multiple new nuclear reactor companies, Seaborg included. The MSRE’s moderator was graphite. Graphite can withstand the MSR’s extreme conditions of high temperatures and corrosive environments, but it undergoes irradiation damage over the lifetime of the reactor. This results in first contracting, and then swelling of the structural material, which creates cracks that can eventually lead to failure. The issues with graphite translate primarily into a need to replace the reactor core approximately every five years due to the short lifetime of the moderator.

Seaborg is taking a very different approach. We replaced the graphite with our patented moderator, molten sodium hydroxide. It has melting and boiling points compatible with those of molten fluoride salts used in MSRs, and — most importantly — as a liquid, it does not suffer irradiation damage. It serves well as a moderator due to its neutronics properties, which also allow for a considerable reduction of the dimensions of the reactor core (hence the “compact” in the name of the CMSR).

Sodium hydroxide introduces another challenge that Seaborg is tackling with extensive experimental campaigns – corrosivity. If not controlled, the chemical properties of molten sodium hydroxide at high temperature cause the structural materials of the reactor, ie, the vessels and tubes containing the molten salt, to undergo corrosion. Even iron- and nickel-based alloys typically used for construction of high temperature nuclear reactors struggle to contain untreated molten sodium hydroxide. However, with the combination of state-of-the-art materials and our proprietary corrosion control methods, the structural materials of the CMSR suffer a significantly reduced corrosion rate. The operational lifetime of a single CMSR is thus expected to be 12 years, outperforming graphite-moderated MSRs.

To ensure that the reactor core tubes in contact with both corrosive fluoride and hydroxide salts can withstand the harsh conditions of a nuclear reactor, we are carrying out a substantial number of experiments with a focus on mastering the corrosion control.

With our brand new, state-of-the-art laboratories, it is possible to run a multitude of experiments at the CMSR operating conditions with the fuel salt, moderator salt, and secondary salt in parallel. The testing campaigns are used for materials selection, sensor and process development, property measurements, validation of concepts, models, and requirements, and more.

We are also designing, building, and testing our own, custom-made experimental facilities and prototypes. We have established national and international partnerships, both industrial and academic, to streamline work on experimental validation activities. Our internal engineering and chemistry experts are working hand in hand to develop molten salt flow loops for testing and validating aspects of the reactor design. Our ongoing long-term testing campaign addresses our key IP, the sodium hydroxide corrosion control.

When neutron energies are high, such as those for neutrons resulting from fast fission, the interactions between neutrons and materials are well understood and can be modelled accurately for all materials using Monte Carlo techniques. However, the CMSR relies on sodium hydroxide to lower the neutron energies to the thermal regime. To accurately model the moderation, precise knowledge of the interactions between neutrons and materials is essential, since ultimately these interactions, which occur on the atomic scale and below, determine the macroscopic quantities such as neutron spectrum, energy deposition, and reactivity.

The thermalization itself depends on specific properties of the sodium hydroxide molecular structure, which to date are unknown, and thus it is not possible to precisely model the thermalization process. For these reasons, an experimental campaign has been initiated to measure the specifics of neutron scattering by sodium hydroxide. Equivalent experiments were conducted for water several decades ago to understand details of moderation taking place in conventional reactors based on moderation in water.

Since the interactions of interest depend on excitations of target molecules, they depend on the temperature and, in particular, on the material phase. To be able to accurately model the CMSR under all foreseeable scenarios, it is necessary to model the interactions of neutrons with both solid and liquid sodium hydroxide over a wide temperature span.

The experimental campaign required to measure the neutron scattering on sodium hydroxide started with the solid phase. In a collaborative effort between Seaborg and neutron scattering experts from the European Spallation Source (ESS) in Lund, Sweden, and ISIS in Oxfordshire, UK, a sample of sodium hydroxide was exposed to the neutron beam at the VESUVIO experiment at ISIS and the energy-dependent total scattering cross section was measured at several temperatures. Total cross sections were then computed from the transmitted spectra and are currently undergoing post-processing. It is our intention to publish and share the developed library publicly once completed.

During the CMSR’s normal operation, the moderator will be in a liquid form and at elevated temperatures, and so the measurements and modelling must be repeated using a liquid sample. The collaborative efforts between ISIS, ESS, and Seaborg are continuing in order to design the next experiment.

While there are still experiments to perform and essential data to collect, Seaborg is on a clear path to advancing the design of the CMSR and bringing the reactor to market in 2026. 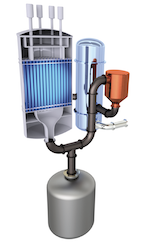 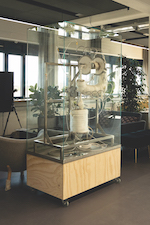