Ling Ao nuclear power plant is located on the Dapeng Peninsula in Longgang district, Shenzhen, Guangdong, China, about 60km north of Hong Kong. It is operated by China Guangdong Nuclear (CGN). Ling Ao has four nuclear reactors.
Ling Ao phase I, comprising units 1 and 2, has two pressurised water reactors (PWRs) rated at 950MWe. They are based on the French 900MWe three-loop design, and began commercial operation in 2002 and 2003.

In 2012, CGN awarded a contract to Rolls-Royce to upgrade the original analogue neutron instrumentation system (NIS) installed by Rolls-Royce in the early 2000s at Ling Ao 1&2.  This was based on the analogue Silimog technology installed at 900MW French reactors in the 1980s. The new digital NIS from Rolls-Royce is underpinned by Spinline technology.
The decision to modernise this system after only ten years of operation was to standardise the NIS across the fleet of nuclear reactors operated by CGN. All of CGN’s other CPR-1000 reactors (20 units) including Ling Ao 3&4, were already using the Rolls-Royce NIS. This allowed CGN to optimise maintenance activities, spare parts ordering and competences management on this critical system.

The neutron instrumentation system is a critical system for safety and availability of nuclear reactors. The NIS measures the neutron flux of the reactor, and continuously and instantly monitors power and how it fluctuates, as well as its axial and radial distribution within the reactor. The NIS is a part of the reactor protection system (RPS) and is a key element of the safety instrumentation & control (I&C) as it provides the signal for reactor trip.

This modernisation project involved the replacement of six electronic cabinets per unit, including the conditioning and processing cabinets. Rolls-Royce’s scope for this project covered the design, manufacturing, supply and installation support.

The main technical challenges for the project were adapting the new equipment to the existing interfaces (electrical features, cabling, room, power supplies, etc.), and installing and commissioning the equipment during the scheduled outages, extending their duration.

The customer also asked Rolls-Royce to integrate potential modifications that may be required to facilitate a potential capacity uprating.

To comply with customer requirements, Rolls-Royce designed new hardware to adapt its Spinline technology to the existing interfaces in the tight time schedule. This was necessary so CGN could avoid modifying other equipment, and so minimise the risk of the project becoming too large in scope to be implemented during the scheduled outages.

The cabinets in white in the diagram have been replaced by new cabinets using the Spinline technology:

Other components or equipment in blue in the diagram have not been modernised.

After two years of design, manufacturing and validation, installation was completed in November 2016. On-site installation was performed Daya Bay Nuclear Power Operations and Management Co Ltd (DBMC), the plant operator, with the support of Rolls-Royce.

Laurys Mouyan, director of the China programme at Rolls-Royce said: ”We are delighted to have completed this first I&C modernisation programme in China.”

“We have worked closely with our customer to ensure that successful installation of the system was completed to schedule, within the 45 day outage period. The new digital neutron instrumentation technology will help to ensure the on-going safety and performance of the Ling Ao reactors. “

“We are completely satisfied by the quality of Spinline technology, as well as by the project execution especially the respect of schedule and the on-site assistance.” 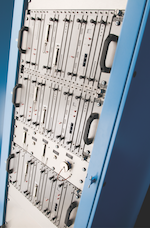 The white cabinets have been replaced by new cabinets using Spinline technology
Post to: