Mitsubishi Heavy Industries has started testing of a new robot at Japan's Fukushima Daiichi nuclear site. The robot, called MEISTeR joins the ranks of a number of others that have worked at the site. MEISTeR - named from "maintenance equipment integrated system of telecontrol robot" has been developed to perform maintenance, repair and other tasks at disaster or severe accident sites.

MHI began full demonstration testing of the robot at Fukushima Daiichi last month, and it has now completed decontamination work and concrete core sampling at the site.

The robot has been testing two decontamination processes at Fukushima Daiichi unit 1:

The recent work at Fukushima has confirmed the robot's range of capabilities and plans now call for MEISTeR to assist in the recovery efforts. MEISTeR is capable of tasks including concrete drilling, cutting of handrails and piping, removal of obstacles, decontamination, repair work, and so on.

MEISTeR weighs 440kg and is 1250mm long, 700mm wide and 1300mm high. It travels using four crawlers, and up to a maxium speed of 2 kilometers per hour. Designed for use in the Fukushima nuclear facilities, the robot is able to climb up to 40-degree angle slopes and steps with up to a 220mm gap.

"By attaching a different tool to the left and right arms, two types of work can be performed simultaneously: for example, grasping an item with one arm and cutting with the other."

Each of the robot's two arms has seven freely articulating joints. By attaching a different tool to the left and right arms, two types of work can be performed simultaneously: for example, grasping an item with one arm and cutting with the other. Each arm can carry objects weighing up to 15kg.

Communication is both wired and wireless and MEISTeR can be wired or battery powered (battery life is approx 2 hours on a single charge).

MEISTeR is an enhanced version of a disaster response robot initially developed by MHI after the criticality accident at the nuclear fuel processing facility in Tokai-mura, Ibaraki prefecture, in 1999.

Improvements have been incorporated into that design based on MHI's maintenance technologies refined at nuclear power facilities. Other adaptations were made to increase the robot's resistance to radioactivity and improve its remote control capability, which gives it the ability to perform a variety of tasks in highly radioactive locations.

These modifications were implemented in cooperation with utility TEPCO and the International Research Institute for Nuclear Decommissioning (IRID). The work was as part of a project funded by the Japanese Ministry of Economy, Trade and Industry (METI).

MEISTeR joins a range of other robots that have been used at the Fukushima site. They include:

In June 2013, Honda Motor Co., Ltd. and the National Institute of Advanced Industrial Science and Technology (AIST) announced the deployment of a robot to conduct on-site surveys within the Fukushima reactor buildings and help discern structures in high and narrow areas.

The High-Access Survey Robot was developed to support the needs of TEPCO by providing information on the conditions inside the reactor building. The robot uses technologies originally developed for ASIMO, Honda's humanoid robot including:

With these technologies, the newly developed robot arm can approach hard-to-see objects that are behind other objects in a complex environment. When approaching the objects, the robot uses a zoom camera, laser range finder and dosimeter located at the tip of the arm to confirm detailed images, collect 3D data and identify the source of radiation.

Quince robots have carried out a number of surveys at the Fukushima Daiichi nuclear power plant since being first deployed at the site in June 2011.

The Quince robot was initially developed by Chiba Institute of Technology, Tohoku University and the International Rescue System Institute to support rescue crews by conducting surveys at the scenes of chemical, biological, radiological, nuclear or explosive disasters.

Like MEISTeR some modifications were required to the Quince machine. Improvements were made to hardware and communications reliability, and new sensors (including a dosimeter) were added before the robot could be deployed at the Fukushima site.

Packbot, developed by iRobot, has also been used for systematic radiation survey inside the Fukushima reactor buildings.

Packbot uses two dosimeters (mounted at heights of 50mm and 1500mm above the floor) and gamma cameras (which compare the radiation field to a photographic image). Data gathered by the robot is used to create continuous 3D contamination maps. It was deployed at Fukushima units 1&3 in June 2012.

Another 'giraffe' type robot has been developed by MHI. The MAR-C, can perform various tasks, including opening/closing of valves and radioactive decontamination work.

The 4-ton robot is able to travel on 15° slopes and reach speeds of 6 kilometers per hour on flat surfaces. Battery power enables continuous operation for 5 hours, even when the manipulator is being used at a height of 8m. 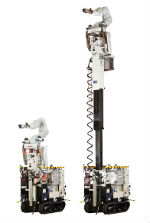 Quince robots, co-developed by three Japanese institutions have conducted a number of survey missions at the Fukushima Daiichi nuclear power plant since June 2011.
Post to: