ITER: on the path to change

Despite being one of the most complex scientific projects in the world, management is the main challenge facing ITER, says the project’s recently appointed director general, Dr. Bernard Bigot.

The ITER site in Cadarache, Southern France was bathed in sun when it opened its doors to journalists in mid May. Construction was progressing on the tokamak building, the canteen was bustling and the site was gearing up for the arrival of three US-procured electrical transformers.

But the huge poloidal field coils winding facility told a different story. Despite being completed more than three years ago, it stood empty, except for a few boxes containing the niobium-titanium conductor that will be used to build some of the largest, most powerful magnets in the world.

Winding operations for assembly of the four (of six) ITER poloidal field coils that are too large to be transported to the site should have been underway by now. But the project has faced a multitude of delays and cost overruns exacerbated by protracted decision-making and ineffective leadership.

Now, it is time for change. "It was a learning process," said Bernard Bigot, who took charge in March with the mandate to 'fix' the ITER Organization. "The time has come to set up a proper, project-minded organization."

It will be no easy task for a project that involves 35 nations, and represents half of the world's population and more than 80% of global gross domestic product. Plus, right from the outset the ITER project has been facing a significant organisational challenge.

For political reasons, when the project was launched each of the parties wanted to have its own domestic agency that could contribute equipment 'in-kind'. This meant that they would provide the components themselves, rather than the financing for them, leading to a very complex procurement situation.

For example, four different parties are supplying parts for the 5000t vacuum vessel, which needs to fit together with millimetre precision. Europe is responsible for supplying seven of the nine sectors of the vessel, and South Korea the remaining two. The in-wall shielding that will be bolted inside the vessel's walls will be delivered by India, with Russia and Korea sharing supply of the ports that will be welded on the D-shape sectors.

Bigot says that while this model was a good idea in principle, not enough consideration was given to integration.

In addition, poor management and inefficient decision-making has contributed to project delays and soaring costs.

Part of the reason for the slow progress is down to the way the project is structured. The European Union, as host party, will contribute up to about 50% of the costs and the other parties 10% each. However, technical decisions require consensus and because those relating to the design of components will inevitably impact some parties more than others, it is difficult to reach. In one case discussions dragged on for six years without a definitive answer, Bigot said. Without that decision work did not progress.

The ITER Organization is now gearing up to take a more decisive role in the project.

“What was plaguing the project before is that there was confusion between the best technical solution and sharing of the cost," said Bigot.

“Now I want just the best technical decision. The cost will be covered according to the share of the parties, reflecting the spirit of the ITER agreement."

With this in mind, Bigot, who took up the role of ITER director general three months ago, is hoping for two key changes to the project: the setup of a reserve fund; and more power for the director general to take technical decisions. In March the extraordinary council agreed in principle to these two changes, which need to be approved in November.

“In any large project... according to the cost of the procurement you need 15-20% contingencies," said Bigot, who has had a long and distinguished career in research, higher education and government.

“You also need somebody that is trusted by the parties to take the decision and who has the power to implement it," he added.

In a situation where each 12 month delay adds around €200 million to the overall project cost (and that is based simply on the costs of running the 2000 person ITER Organization), the time has come to become more 'project-minded,' he said.

One of Bernard Bigot's first priorities since his appointment has been to provide a new cost, schedule and scope 'baseline' for the ITER project.

Bigot would not disclose any details of the new schedule (also due to be released in November), but he admitted that the baseline accepted in 2010, which expected first plasma by 2019, is "clearly not feasible" and that the project has run into many delays.

Still, Bigot stressed that the first plasma is 'not the real end of the story,' and that deuterium-tritium plasma (previously planned for March 2027), is more significant.

“We are now considering the best way to move on from the first plasma and rush as much as possible to the DT plasma, which will please the scientific community," Bigot said.

The new baseline is expected to be realistic, but aggressive, and needs to be accepted by all parties involved.

If some parties face difficulties complying with the schedule for delivery of equipment, the ITER Organization has to put the interests of the project first, which could see it step in and redistribute tasks.

The Organization has already taken charge of procurement of some components on behalf of domestic agencies, although they still remain responsible for the costs.

Despite changes to the timing, Bigot does not anticipate any changes in the scope or ambition of the project.

“This project started in 1985. Since then many scientists and engineers have been considering the scope of the project and the necessity to have the ITER facility to demonstrate the best conditions for the delivery of fusion technology."

“I do believe as it has been worked out from the beginning that the size and scope of the facility is the right one," Bigot said.

“You cannot demonstrate fusion with a facility that is half the size."

Bigot said that even if technical changes are needed to optmise the ITER design, his primary concern is coming into difficulty with financing, which will reduce the capacity to demonstrate.

The project is too far advanced for design changes, with more than €7 billion of procurement contracts in place and over 1000 companies at work, Bigot said.

“You could not just change [the scope] in the middle...you have to go, or stop."

He concluded: "The time has come for the ITER Organization to demonstrate it is serious. The biggest risk is that we lose trust of the political leaders and public opinion, then the project would be dead."

Caroline Peachey is editor of Nuclear Engineering International. She visited the ITER site as part of a press trip on 18-19 May. 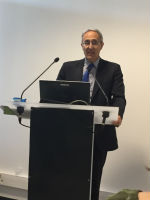 In the foreground, the area excavated for the future ITER Hot Cell is used to store, and pre-assemble, the materials used for wall construction (Credit: ITER Organization)

In May, the first plant components—two transformers—were installed on the ITER site (Credit: ITER Organization)
Post to: