The opportunity for a life extension of the last of the UK’s magnox fleet of reactors only arose after fuel production had ceased, so no more new fuel was available. To keep the reactor working without exceeding fuel burnup limits, Magnox Ltd decided to sacrifice one unit and harvest its low-burnup fuel. By Ashley White Wylfa 1 is the last magnox-fuelled, carbon-dioxide-cooled, graphite-moderated reactor in operation. The reactor type is so named because of the composition of the magnesium non-oxidizing metal cladding over its natural unenriched (0.7% U-235) or low-enriched (0.8%) uranium metal fuel.

Wylfa is also the largest of the fleet, with a capacity of about 490MWe per unit. There are 6156 fuel channels in each unit, each channel holding a stack of eight fuel elements each a metre long. Online refuelling is carried out continually (replacing 200 channels in a two-month cycle) using special machines.

Around the turn of the century, the UK government committed to finish reprocessing magnox fuel at Sellafield by 2020 to help reduce discharges into the north Atlantic. To fit in with that, closure dates for remaining operational magnox reactors were set; Wylfa was to be closed in 2010. As a result, the magnox fuel line at the Springfields fuel manufacturing plant ceased production in 2006-7. But around the same time, it became clear that delays in Sellafield's fuel reprocessing operations would allow a window of extra generation time (see also The magnox life extension story).

In 2008 work started to investigate the possibility of extending electricity generation at Wylfa beyond the planned generation cessation date of December 2010. A number of regulatory approvals were required in order to allow this to happen, namely the re-validation of the Periodic Safety Review (PSR) to enable generation until the end of September 2014. Although this review confirmed the plant was safe to operate until then, further work was required to identify how best to utilise the remaining new fuel stock to achieve this aim.

"One option that was considered, but quickly dismissed, was retrieving partly-burned fuel elements from the dry store."

A number of fuel savings schemes were submitted late in 2008 and, after careful consideration, the preferred options were agreed and supporting studies specified to facilitate the preparation of safety cases. The preferred options were selected on the basis that a finite new fuel stock was available to Wylfa, with no prospect of future manufacture of new fuel elements.

One option that was considered, but quickly dismissed, was retrieving partly-burned fuel elements from the dry store. (Wylfa is the only magnox reactor with a dry spent fuel store). The elements resident in DSCs had already been declared as 'spent' in fuel tracking systems, and their isotopic calculations for plutonium carried out in order to allow the fuel to be shipped to Sellafield when required. It would have been nearly impossible to reverse this calculation in the tight timescales required. Also, typically the fuel elements in the DSCs were there because they were nearing their irradiation limits (~6500MWd/t).

Three options were selected. First, both reactors were loaded with more enriched fuel elements. A count of available fuel identified that it was not possible to generate electricity beyond early 2011 under the fuel loading pattern at the time. As a result changes were introduced to even out the stocks of unenriched and enriched fuel by loading more enriched channels were into each reactor. No safety case approvals were needed for this initiative as the change was within the current enriched fuel loading safety case.

Second, the bottom two fuel elements were retained in both reactors. There are eight fuel elements in a channel; the bottom two elements, FE1 & 2, experience less neutron flux and therefore have lower irradiation than the top six fuel elements. A safety case was prepared to justify leaving FE1 and 2 in-situ whilst the rest of the channel was refuelled, hence maximising fuel usage and remaining within fuel irradiation limits.

Third, fuel would be transferred from one reactor to another, known as inter-reactor transfer (IRX). This was the only fuelling regime that would allow any generation beyond mid-2012, although it would require the permanent shutdown of one reactor. The magnox reactor Oldbury was the first of the fleet to implement IRX, for about six months in 2011-12, by shuttling its refuelling machines from one reactor pile cap to another.

At Wylfa, new fuel stocks were allocated between reactors one and two in such a way that one reactor would shut down before the other and 'donate' its low-irradiation fuel to the other generating reactor. A decision-making workshop was convened to identify and confirm which reactor would become the 'donor' and which the 'recipient'. Reactor two (R2) was identified as the donor reactor for a number of reasons, mainly because R2 was not capable of as high power levels as Reactor 1 (R1) as a result of boiler inefficiency. Consequently, less new fuel was allocated to R2 and it was permanently shut down in April 2012. R1 continued to operate using the final remaining fuel stocks.

Work on developing and preparing the IRX safety case began in 2010. The safety case addressed issues such as fuel endurance, reactor fault studies, fuel route faults, human factors assessment, the shutdown margin of R2 and associated re-criticality modifications. The submission proposed changes to operating rules required by Site Licence conditions which were subject to approval by the UK nuclear regulator, the Office for Nuclear Regulation (ONR).

A number of supporting safety cases were prepared in parallel with the IRX safety case to allow implementation works to take place. These included:

Significant changes were also made to site documentation, in particular operating instructions, and a detailed training programme was rolled out to affected personnel. Wylfa faced many challenges throughout the programme in overcoming tight timescales to produce revised safety cases, changing procedures and training operators. It invited a number of experts to undertake independent review of the arrangements and strategy for implementation. Wylfa submitted the IRX safety case for ONR approval in December 2011. From August 2012 Wylfa has operated successfully under the IRX regime.

With R2 now permanently shut down, channels of fuel (six elements high) are removed in batches and stored in Dry Store Cell two (DSC2), the only storage facility accessible from both reactors. A batch typically consists of 250 fuel channel removals, which takes approximately four weeks. All channels removed from R2 are kept in the same axial position. Fuel is being removed on a 'last in, first out' basis. Therefore fuel that is eligible for IRX has a maximum burnup of approximately ~3000MWd/t, so a typical fuel channel loaded to R1 under IRX will see a final irradiation (burn up) similar to that of a normal fuel channel.

Typically, R1 is refuelled for a period of four to five weeks, when up to 200 channels can be refuelled before fuel removal begins again on R2. This cyclical process continues and reactor fuelling machinery maintenance is scheduled according to this cycle in order to minimise the number of interruptions to the fuel movement process.

Daily progress meetings are held with representatives from relevant departments to ensure emergent issues are dealt with efficiently and effectively, refuelling targets are met, and resultant reactor power output is maintained.

"Almost 1300 channels of fuel have been removed from Reactor 2 and loaded to R1 to enable it to operate at nominal full power, with similar power levels predicted to continue for the next 12-15 months"

As of March 2014 almost 1300 channels of fuel have been removed from Reactor 2 and loaded to R1 to enable it to operate at nominal full power, with similar power levels predicted to continue for the next 12-15 months, as long as refuelling rates are maintained. A gradual drop in power will then follow.

However, work is currently underway to justify further fuel optimization measures which would mitigate this decline in power. In R2 fuel channels not eligible for IRX because of high burnup, the top fuel element (number 8) experiences far less neutron flux than the rest of the channel. A safety case has been submitted to the regulator to remove the useful FE8 elements from Reactor 2 and place them in another dry store in channels of six elements. They would be initially stored in dry store 3, and then moved by the transfer machine to dry store 1, and then loaded to Reactor 1. Such a plan would provide a diverse refuelling route that will supplement the IRX fuel cycle, delaying the drop in core reactivity. A re-optimization study of the IRX fuel cycle (covering for example the ratio of enriched/natural elements) is also planned.

During 2013, Wylfa delivered 3.63TWh of electricity, bringing the total amount of electricity generation since inter-reactor transfer (IRX) refuelling started to 4.51TWh. This figure is more than 97 per cent of the value set out in the business case for Wylfa to generate until September 2014, which means that almost all the electricity generated from March 2014 will be of additional benefit.

As a result of IRX and future fuel usage schemes, the plan is keep R1 running until December 2015 (pending regulatory approvals) - five years' additional generation. The extension to generating life has also lengthened the period of employment for many at Wylfa, with positive socio-economic effects. A Wylfa life extension decreases the potential gap between end of generation and the start of new nuclear build, hence retaining specialist skills and knowledge. 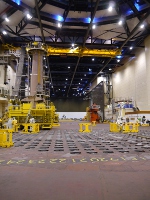 As a result of IRX and future fuel usage schemes, the plan is keep R1 running until December 2015 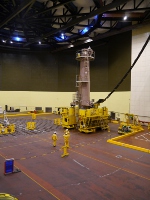 With Wylfa R2 now permanently shut down, channels of fuel (six elements high) are removed in batches
Post to: