A new approach to human-machine interfaces has produced a radically different design of control room displays. The first of these has now been installed at the Halden research reactor in Norway. By Alf Ove Braseth In the aftermath of Three Mile Island, Chernobyl and other high-profile accidents, there has been focus on control rooms' user interfaces, how our complex plants challenge human capacities, and the challenge of presenting the big picture of a plant's status. One solution is using Large Screen Displays (LSDs). Unfortunately, LSDs are often just up-scaled versions of desktop workstation displays. Recent research and industry standards such as IEC 61772 (2009) suggest that this is not sufficient.

To mitigate this, the Norwegian Institute for Energy Technology (IFE) in Halden has developed a from-the-ground-up LSD concept named Information Rich Design (IRD), where the objective is to display the greater picture of plant status in a rapidly perceptible manner on a LSD, while leaving in-depth details and process interaction for desktop workstation displays. The concept consists of graphic display objects and design principles for LSD graphics. IRD is grounded in a broad research perspective, combining scientific theory, user tests and feedback from industrial applications. It has been applied commercially in the petroleum domain by IFE's design team, used in research applications for full-scope nuclear simulators, and used for IFE´s research reactor in Halden.

Situation Awareness (SA) is a concept used in analysis of decision-making in complex systems; it incorporates how operators perceive the situation. One challenge in LSD design is how to visualize the greater picture of process dynamics, showing how processes variables behave dynamically: pressures fluctuate, liquid levels move up and down, etc. Standards and guidelines stress the importance of visualizing time variance: NUREG-0700 explains how large group-view displays (LSDs) should support overall assessment at a glance, indicating both major changes in plant condition, such as alarms, and minor disturbances.

We have focused on indicators that visualize process variable fluctuations in an intuitive way; this is sometimes referred to as "direct perception". Figure 1 illustrates how different visual objects can represent the same process data.

For this reason, we have focused on rapidly-perceivable trended graphics, offering direct perception of dynamic process behaviour. Below, we will describe how these trended objects have been further developed to reduce visual complexity for industry scale data sets by applying part-wise mathematical normalization, and how we have integrated alarm and automation data for increased information richness.

First, we use generic indicators for simplifying graphics, using the same objects for liquid level, pressure, temperature and flow. Second, to further reduce visual complexity, IRD uses indicators that can be arranged to create visual patterns, where process values and alarm limits align in horizontal bands in the LSD.

"Normalized graphics are generally more suitable for spotting deviations qualitatively in LSDs, than for detailed readings"

The downside of normalized graphics is how they distort reality. They might not be aligned in situations such as start-up, shut-down, and major upsets, and are less helpful for identifying how far alarm limits are exceeded, or how far process values are off target values. On the positive side, such graphics reduce visual complexity for industry-scale data sets. Normalized graphics are generally more suitable for spotting deviations qualitatively in LSDs, than for detailed readings. Feedback from operational LSDs suggests, however, that this is an acceptable trade-off when LSDs are used to complement desktop workstations, which present detailed information.

Using a similar trend-time on the x-axis for all types of variables on mini-trend displays is a problem. Typically, pressures can fluctuate rapidly within seconds, while liquid levels change within minutes, and temperatures react even more slowly. We found a typical trend-time on the x-axis of 10 minutes to be a reasonable approach for mini-trends; however, this is not ideal for all types of process variables. We have found it necessary to add long-term trends showing hours on the x-axis for key variables for some LSD applications.

Human factors review guidelines from NUREG-0700 in the group-view (LSDs) section explain how it is difficult to maintain awareness of plant status through desktop workstations since they only display a portion of the total plant information (keyhole view), and how navigation through display hierarchies causes delays in operator responses.

We have approached the problem of keyhole effects and visual memory limitations firstly through larger display surfaces, secondly through a 'flat' layout without display hierarchies, and thirdly through data-rich graphics. One example of the latter is how we have integrated automation and alarm data within generic indicators; this is illustrated in Figure 3 .

In this example, from left to right, we can see the effect of an increasing process value on the signal to a controller, and the valve position, both of which are plotted on the right-hand side of the box (vertical position represents extent of system response: top represents 100% controller signal or 100% open valve). T1 shows a stable situation where process value is at set point, and where controller signal is relatively low and the valve is mostly closed. At T2, the system automatically reacts to an increasing process value by ramping up the controller signal, but since it typically takes a longer time for the actual position of a valve or pump to respond, a vertical gap opens between the controller square and valve position line. At T3, the parameter has continued to increase, exceeding an alarm limit. Both controller signal and valve position have continued to respond: controller signal has also increased to its full value, and the valve has mostly opened. In a situation where the system does not respond to a process variable, this design makes it possible to distinguish whether the problem lies with the controller signal, or whether the actual valve/pump is not reacting properly, which might indicate a stuck valve. The graphic also shows violated alarm limits, and a small arrow indicates predicted development. The objective of this design is to avoid the need to visit different parts of a display hierarchy to mentally construct an overview of the situation. It should, however, be noted that this design is better suited for qualitative data perception than for accurate readings.

"Change-blindness... is of particular concern for large displays, since users need to look around for information"

Recent research has shown how change-blindness (being unable to detect changes because visual processing capacity is already stretched to its limit) is of particular concern for large displays, since users need to look around for information ('Attention and Visual Memory in Visualization and Computer Graphics' by Healey C. G, Enns J. T., IEEE Trans. On Visualization and Computer Graphics, vol. 18, no. 7, 2002, pp. 1170-1188). It described how design should take advantage of our built-in apparatus for fast pattern finding and should use perceptual salience to direct attention. Visually salient graphics are often referred to as pop-out effects.

We find this particularly interesting for visualization of alarms. We have found that equally-sized filled alarm squares create stronger, more consistent, visual pop-out effects than alarm frames, (which can vary in size with process objects' sizes). A neutral background (such as grey) is suitable to facilitate pop-out effects. Furthermore, it is quite common to use blinking/flashing effects for new alarms. However, on large displays this can create unfortunate tiring visual effects. For this reason, we have developed a gentler animation effect to draw attention to new alarms, illustrated in Figure 4. This dynamic alarm-spot can be used for alarms on all types of process values and equipment.

Other research describes how people must be able to quickly switch between goal (top-down search) and data-driven (bottom-up, typically alarms) processing to achieve adequate situation awareness (Designing for Situation Awareness, An Approach to User-Centered Design, by M.R. Endsley, B. Bolté, & D.G. Jones (2003)). To design for this, we examined research in human-computer interaction that described the process of how people perceive information. Healey and Enns (2012) describe how seeing is done through a fast dynamic cycle of short stops (fixations) and rapid movements (saccades), where only a limited number of visual features can be detected within a single cycle. Other research suggests organizing data through large- and small-scale structures to support efficient visual top-down search (C. Ware, Visual Thinking for Design (2008)) . He describes further how relationship between concepts could be established through: proximity grouping, enclosing contour, common colour region, alignment and lines and connectors, inspired by Gestalt psychology.

"We have designed LSDs to support search by positioning process data in a familiar context of different-sized backgrounds..."

From this, we have designed LSDs to support search by positioning process data in a familiar context of different-sized backgrounds, by grouping related data, and by connecting them with medium-colored lines and open space. This has resulted in a graphical design that is relatively familiar to operators, while at the same time supporting search for, and rapid overview of, information. Figure 5 shows the Halden reactor LSD designed by IFE's expert operators and the author, which was recently implemented along the IRD design principles presented in this article.

IRD is being explored for the nuclear domain through iterative research on three LSDs. This research is partly a joint project for Nordic nuclear power plants using crews of certified operators. The two first LSDs were implemented on large-scale nuclear simulators: the first at the Finnish Loviisa NPP, and the second in IFE's simulator for Swedish Forsmark-type NPPs (HAMBO LSD). The last user test was done for a live control room installation for the Halden reactor LSD.

Based on user feedback, improvements were made for the Halden reactor LSD. This LSD was compared with the analogue panels it replaced in a user test. The LSD received good system usability scores for subjective perceived support in operational use (Figure 6).

In sum, the results show how the IRD concept has improved through the research process of designing and testing whole LSDs.

Figure 2: The so-called ‘mini-trend object’ summarises current and past data, their relationship (the trend), operational parameters, and the target value.

Figure 6: Results of user testing of Halden reactor large-screen display (red) compared with replaced analogue panels (blue), where 7 is a high, and 1 is a low, degree of support. 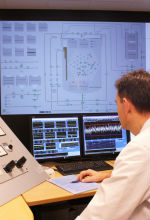