A new generation of remote-controlled manipulators has been developed and trialled at AREVA’s La Hague site in France. By Assem Djedidi, Christophe Selliez-Vandernotte and Fiona Malcolm

For almost 20 years the French Alternative Energies and Atomic Energy Commission (CEA) and French nuclear company AREVA have been working together on a collaborative programme to improve and develop systems for work in hostile environments such as hot cells.

Following the development of the MT200 mechanical master-slave manipulator in collaboration with manufacturer Getinge-La Calhène in the 1980s, the companies have now come up with a new remotely-operated version of the device. With an electrical rather than mechanical link between the master and slave arms, the new manipulator offers improved availability, increases productivity and lowers maintenance costs. The new product has been demonstrated theoretically, with prototype demonstrations carried out in 2009 and 2010. Industrialisation of the controller, MT200-TAO, and a new slave arm TERMAN TAO has been ongoing for the last couple of years and are due to be introduced into the marketplace in 2014 and 2015.

In order to carry out operations in large sealed hot cells, Getinge La Calhène originally developed a mechanical master slave system with a telescopic arm with the CEA in the 1980s. The MT200 can extend up to 4m, and can lift loads up to 20 kg capacity in tongs and 80 kg capacity at hook. The MT200 system is composed of a slave arm in the hot cell, a through-wall tube and a master arm in the cold (non-radioactive) working area. System components can be disconnected into three independent parts. The master arm is also compatible with several slave arms, one of which may be equipped with a protection sleeve, depending on the radiological environment.

AREVA launched a programme with CEA to develop a new system with less downtime and maintenance costs, better performance, safety and ergonomics.

The team has now developed a prototype of a remote manipulator, MT200-TAO, which uses computer-assisted tele-manipulation technology. The CEA LIST Interactive Robotics Unit developed the software, manufacturer Getinge-La Calhène was responsible for industrialization of the manipulator, and its subcontractor Cybernetix was supplied the main controller software and interface controller.

The MT200-TAO system consists of:

The movements initiated by the operator are transmitted in real time to the slave arm via the servo-motors inside the motion module.

The MT200-TAO motion module is compatible with the previous generation of fully-mechanical MT200 manipulators, so that new systems can be used without any alterations to the hot cell wall.

For the operator, the main difference between the two systems lies in the master arm sub-system. In the new generation of manipulator the mechanical master arm of MT200 is replaced by a smaller poly-articulated master arm, which uses haptic (force-feedback) technology. The operator can work remotely on the master arm without being affected by the physical constraints associated with the mechanical link, such as balancing default and joint directional offset. The offset function has been greatly simplified by integration into the haptic master arm. The operator can always be correctly positioned with respect to the ongoing task.

The operator still moves the handle in the direction of the required movement and the slave arm movement follows the same path, with respect to a homothetic (scaled) ratio. There are two modes of operation: articular mode, in which the couplings are based on rotations of the controller arm, the usual mode for manipulators today, or a Cartesian mode, when the master and slave arms are linked in three-dimensional space. The force feedback on both master and slave sides is transparent, that is, the operator never feels the weight of the slave arm. In order to simplify operations, internal movements such as the electrical telescopic motion are driven automatically.

In Cartesian mode the software calculates the slave arm position with respect to a reference point and the master arm position. Operational assistance is provided through special algorithms, for example partial or total load compensation, claw safety, claw rotation, and virtual axis lock-on. Operator effort is multiplied by a homothetic coefficient in the slave arm, thereby reducing the physical effort required to lift and move loads.
In addition, the operator may be positioned anywhere within 100m of the hot cell, with direct vision or camera vision, thanks to the electrical link between the master and slave arm. Thanks to the operation software, this functionality is not affected by operational constraints, such as correlation between hand motion and visualisation of this motion. The camera inside the hot cell is automatically slaved on to the grip position.

A proof-of-concept phase was performed by AREVA using the prototype of the MT200 TAO in situ in 2007 and 2008.

In order to gain knowledge on the operability of the system, AREVA launched a lessons learned programme based on normal operations in a cold testing hall at La Hague plant with active benchmark testing in a hot cell. The programme, which lasted for 40 weeks in 2010-2011, analysed operational performance of the new system in the cold cell with input by an ergonomist and a group of trained operators. After training in the cold cell, experienced operators worked in the hot cell, dismantling and decontaminating glass fusion crucibles, a job selected to maximize lessons learned on the new system. A total of 530 hours were logged with the MT200-TAO system. Results were drawn from three sources: operator feedback with backup from medical services, system feedback with software history and log books, and productivity measurements.

The test results showed that the mean time between failure of the MT200 is linked to loads lifted and stress applied on the system. Thanks to TAO computer assistance, load saturation is possible at three levels -- 7 kg, 11 kg and 15 kg -- that limits the torques on motors and mechanical parts through electrical current control. This feature gives the MT200 TAO slave arm a MTBF up to ten times longer than that of a standard mechanical MT200 system in identical duties.

During the testing campaign, no maintenance was required on the operator side of the system. On the hot-cell side, the amount of maintenance necessary was much less than expected. Operators had to change one slave arm and four knee levers, a saving of five slave arms compared to the MT200 mechanical manipulator, resulting in significant reductions in time, cost and waste.

Since the slave arm is not linked mechanically to the master arm, it is possible to place the new master arm in a safe location. Therefore, the operator is in a less irradiating zone, with no contamination risks or overhead equipment.

The industrialized MT200 TAO is currently being commissioned; hot tests are planned toward the end of the year. Trials on the new TERMAN TAO will begin in the April-June 2015 period.

These two systems will open a new era in telemanipulation. Beyond this short-term future benefits (noted above) we may imagine wider and far more benefits including an impact on cells and building designs. For example, TAO systems may be attached to ceiling of the cell or attached to a mobile gantry inside the cell, enabling far larger working areas.

The TERMAN slave arm, a mechanical arm with eight degrees of freedom, is used for manipulation inside confined zones, also known as hot cells or active cells, in the nuclear industry. Like MT200-TAO, the connection between the master arm and the slave arm is electrical instead of mechanical, thereby eliminating friction in the entire system and enhancing force feedback.

The TERMAN slave arm is capable of manipulating a wide range of objects with a high level of precision, from the very light (for example, changing a light bulb using manual mode with tongs) to the very heavy. Tools for grinding, shearing and chiselling are available.

Its four telescopic tubes give the TERMAN slave arm a working range of between 1460 mm and 4010 mm. The arm can lift 20 kg in all positions with minimal flexure, 40 kg in the vertical axis and 80 kg on the hook. The arm contains no cables, only gears and bars, so is entirely rigid.

In robotic mode, operations are done in virtual reality then applied in real time. This limits friction and promotes efficiency since recurring manipulations are repeatedly carried out with the same precision. Robotic mode is particularly useful for screwing and unscrewing items inside the hot cell.

The TERMAN TAO manipulator provides the operator with a permanent ideal working position and vibration-filtering, plus full-range high-performance force feedback, thereby reducing effort and fatigue while improving accuracy and efficiency.

The operating field is significantly increased, since the slave arm can cover an area three times that covered by the MT200 TAO arm, on which the design is based. Since it is no longer limited by mechanical linkages, the arm can extend vertically above the through-hole. Robotic mode provides optimal precision and speed for repetitive tasks.

Benefits for the operator include improved accuracy and efficiency, with cost savings in the long run. The state-of-the-art equipment is more reliable, thanks to specially-programmed upper load limits, thereby increasing MTBF and bringing maintenance costs down. 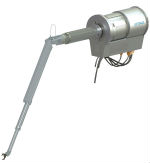