Spent fuel pools were not originally designed for long-term storage, which today can span decades, and as a result many have reached or are approaching capacity.

One potential solution to this problem is to store assemblies closer to each other by re-racking existing pools or installing high-density grids in new facilities. Vendors claim that this can increase storage capacity by a factor between two and five times. Re-racked pools must meet the same stringent regulatory requirements for safety that apply to the original pool racks, such as meeting seismic qualifications and maintaining sub-criticality of the fuel by incorporating neutron poison materials.

AREVA's Transnuclear Inc, which supplies lightweight NuStor racks with a 60-year design life, uses a 'full pool model,' developed using state-of-the-art computer codes and analysis techniques, to qualify its NuStor racks for even the most severe seismic conditions. Its models for criticality analysis take into account fission product experimental data (from AREVA) as well as the use of poison (neutron-absorbing material) for criticality protection. Thermal-hydraulic modelling of the complete pool with racks installed can also be carried out for fully- and partially-loaded racks as well as up to 50% mixed-oxide fuel configuration. NuStor racks are qualified for use at new US EPR reactors, and offer multiple fabricators for rack modules and poison material, Transnuclear said. The racks can also be used for storage of new fuel assemblies in dry fuel storage vault areas.

US-based Holtec International supplies custom-design fuel racks for wet storage capacity expansions both inside and outside of the US. The company is also developing high-density fuel racking for the APR-1400 and ABWR reactor designs. Holtec uses its patented METAMIC as the neutron absorber material in its racks. It also sells the material, which it manufactures at a Lakeland, Florida factory, to other companies. Holtec has supplied and installed racking in more than 100 spent fuel pools since the mid-1980s, and claims to hold 100% of the high-density fuel racking market in the USA. It says the work, carried out through its site services group "involves rigging and heavy load handling in and around spent fuel pools with rigorous compliance to NUREG 0612 and ANSI N14.6 and defence-in-depth requirements".

Japan's Mitsubishi Heavy Industries has developed a high-integrity freestanding spent fuel rack suitable for both boiling and pressurized water reactor fuel. The borated steel rack can be placed directly on the floor of the spent fuel pool without any fixings (or in air), according to MHI. The design actively incorporates the effects of the friction force generated on the spent fuel pool floor, and the fluid damping effect, which gives structural integrity and reduces response if the rack is subjected to large seismic loads. In partnership with Japanese utilities, MHI has recently tested a full-scale 7x10 rack model (dimensions 3m x 2m x 4.5m), in a water tank under artificial earthquake conditions to evaluate the sliding and rocking motions and spent fuel rattle.

CCI (formerly Sulzer AG) has designed and manufactured high-density spent fuel racks for storing a total of 13,000 fuel elements at nuclear plants in France (12 units), South Africa (Koeberg 1&2), Spain (Cofrentes), Netherlands (Borssele) and Switzerland (Beznau 1&2, Gösgen, Muehleberg and Leibstadt). The company is currently working on an order for 12 units in France, the design of which will comprise a stainless steel structure with neutron-absorbing borated stainless steel frames, it says. CCI has mainly supplied freestanding racks, but can also offer an anchored type (as it did for the back-fitting of Beznau 1&2 in 1986).

Czech company Škoda JS says that its compact spent fuel racks can increase the storage capacity of five-year-old VVER 1000 reactor fuel by 1.85 times, providing 680 positions for fuel assemblies and 25 positions for hermetically-sealed cans. Since 1993, Škoda has supplied compact racks for 18 VVER-440 and VVER-1000 units in the Czech Republic, Slovakia, Hungary and Ukraine.

For Finland's Loviisa VVER reactors, Metso has supplied compact racks, each storing up to 352 assemblies. The hexagonal-racks include boron-containing plates between the spent fuel rods.

Siempelkamp has supplied high-density fuel racking of various designs to German nuclear power plants, including compact storage racks for Biblis, Isar and Gundremmingen, but said that this is not one of its core competencies. 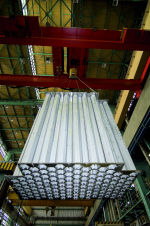