Equipment located in containment monitors and inspects fuel for leaks. By Will Dalrymple

Damaged fuel rods can leak fission products, worsening the working conditions of containment, and potentially requiring longer outages for cleanup. Varied initiatives in the US and elsewhere have involved utilities, fuel suppliers and others to improve fuel reliability. Utilities can deploy many different combinations of equipment to monitor fuel in situ during planned outages.

Fuel sipping systems analyse samples offgas or combinations of water and offgas for the fission products that might indicate a leak. The traditional method involves a vacuum sipping canister installed in guide tube storage cells or in customized support stands. Once a fuel assembly is placed in the canister, a pump creates a vacuum, sucking up fission gases from leaking fuel rods, which then reach detectors. AREVA's system uses two canisters with a cycle time of 10 minutes per canister, or up to eight fuel assemblies per hour. Control consoles can be set up as far as 75 feet from in-pool components. GE-Hitachi also offers a vacuum canister sipping system. Advance Instruments of Taiwan supplies a poolside vacuum sipping system liquid controller and process vacuum sipping controller for use with PWR and BWR fuels. Both can be used with GE equipment, and offer immediate graphic display of measurement results.

AREVA's sipping hood detects failure in the core by sampling both water and gas from each assembly. AREVA says that it interrupts the natural circulation of coolant through the bundle by using the sipping hood, and compressed air lowers the water level in the channels. Sample probes are then lowered and water samples acquired. Water fills the void as it is exhausted and forces air up the vent line to the detector. The analysis system assesses the integrity of each fuel assembly, and an audible alarm identifies failed fuel assemblies to the system operator. The technology, used since 1992, has inspected more than 8500 fuel assemblies.

A newer method of monitoring fuel defects integrates sensors in the mast of the refuelling crane, which has the benefit of not adding inspection time to what could be the critical path.

Russian supplier Diakont recently launched a sipping system integrated into its refuelling machines for VVER- based reactors. The new system conducts radionuclide inspection of fuel assemblies simultaneously during offloading. The mechanical portion of the system is integrated in Diakont's refuelling machine mast, and delivers compressed air under the liner of the fuel assembly. After passing through the assembly, air is drawn into the test chamber for sampling. The system has been integrated entirely into the automated fuel offloading/shuffle/loading programme, so that inspections can be carried out entirely automatically, if required.

Westinghouse's TELESCOPE sipping technology either integrates directly into the PWR fuel mast or attaches temporarily to the BWR refuelling grapple. Raising the fuel assembly creates a pressure differential across the fuel cladding; leaking fuel equalizes the pressure differential by releasing fission by-products through the cladding breach. The released fission products enter the water surrounding the fuel assembly and rise upwards. Water containing the fission products is pumped from the top of the fuel assembly to a separation tank built into the sipping skid where gases are separated from the water and analysed. The system provides real-time leaking fuel detection with minimal impact on the fuel movement schedule, according to Westinghouse. A recently-upgraded unit is claimed to reduce setup time, minimise dose and have improved operator interfaces to mitigate human performance errors. AREVA also offers a mast sipping system.

Ahlberg Cameras' On-Line 4-Face Fuel Inspection system offers simultaneous fuel assembly inspection from all sides in colour, with a fifth camera or tilt function for inspection of the bottom nozzle. It can also measure fuel assembly bow, with an accuracy of +/- 0.4 mm using HD cameras. The system consists of four or five radiation- tolerant colour zoom cameras, underwater lights, a four-way split-screen monitor and a recording unit to save images for analysis. The inspection system can be mobile or permanently-installed in a variety of positions.

Once a PWR or BWR fuel assembly with a leaker is detected, equipment like Tecnatom of Spain's ultrasonic-based SICOM inspection apparatus can pinpoint the bad rod. This device, which examines a single rod, uses an ultrasonic non-destructive testing technique to detect irradiated fuel rods that have developed leaks during the burnup cycle in the reactor. The SICOM UT equipment incorporates a low-cost video system resistant to high levels of radiation, ultrasonic probes developed by Tecnatom- Metalscan and the inclusion of an automatic ultrasonic signal analysis software based on INSPECTVIEW data acquisition software, also developed in-house. 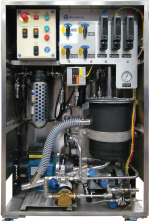