For the longest time

Taking a more long-term approach than former owner British Energy, EDF Energy plans to extend the lifetime of its UK advanced gas-cooled reactor fleet for as long as it remains safe and cost-effective to do so. By Will Dalrymple

In 2012, EDF Energy made two major announcements about its 14-unit UK gas-cooled reactor fleet. First, it predicted that it would extend their lives by an average of seven years; and then, later in the year, announced that the two oldest reactors would remain in operation until 2023. This news, which has for the first time established a clear lifetime expectation of about 45 years for an AGR reactor, was based on detailed research into the limiting economic and technical factors.

Designers of the UK's advanced gas reactor (AGR) fleet estimated that their reactors would operate for at least 30 years, with an accounting life of 25 years. But they were uncertain exactly how long they would last. The fleet was constructed in the 1970s-1980s as a successor to the first generation of gas-cooled reactors (the Magnox fleet), and like them, AGRs generate heat from low-enriched uranium fuel assemblies mounted within graphite blocks that moderate fission neutrons. CO2 gas coolant is blown through the channels, removing the fission heat and transferring it to a secondary circuit via in-core boilers. After their own lifetime extension programme ended a few years ago, only one Magnox reactor remains in operation; the 19 reactors had an average life of 36 years and 57 TWh generated.

AGR lifetime has been extended in the past. From the 1990s, the then-privatised British Energy's plan for life extension mainly involved making a short-term decision to keep the reactors going for another five years (except Dungeness B, which got 10). So the utility knew that the reactors were safe at present, and for a five-year period thereafter, but it did not look farther down the line. At the time, such short-termism made sense, according to Nigel Houlton, EDF Energy's head of lifetime programmes. In the 1990s, British Energy was a newly-privatised utility; in the 2000s, it developed financial problems. Also, the AGRs still had some expected life in them.

The five-year period is significant because it is half the duration of the frequency of a periodic safety review mandated by the UK nuclear regulator. Unlike in the USA, where reactors have an initial licenced operating life of 40 years, the UK follows the European system of PSRs every 10 years, whose successful completion allows operation until the next PSR. In addition, a restart after a planned 'statutory' outage every three years requires regulatory approval. EDF Energy arranges these outages at AGR stations so that they alternate between the station's two reactors, and are spaced 18 months apart. Unlike PWRs and BWRs, these outages are primarily for repair and maintenance and not refuelling. Like Magnox reactors, AGRs are very large and use many thousands of low-enrichment fuel assemblies. To keep up plant generation efficiency, AGRs were designed to be refuelled online; however, some AGRs have not been successful at implementing online refuelling and so must be shut down to refuel several times per year.

When EDF acquired British Energy for £12.5 billion in 2008, it did so with an expectation of a five-year AGR life extension (on top of accounting life, or in other words 30 years in total). But once it took ownership, a different attitude came to prevail. "Inevitably, when they paid the amount of money that they paid for BE, there was the question, what underpins that five years? Is that it? Is there the potential for more?," Houlton says. Also, its new majority owner EDF (Centrica holds the other 20%) takes a long-term strategic view of investments and development of the business, Houlton says. EDF is 85% owned by the French state.

The questions led to a research project in 2010-2011 to establish fleet lifetime goals that took into account technical limiting factors in the reactors, economic limiting factors in operating the reactors, and strategic factors in the business. It considered the wider context around the power plants, including fuel supply (from the Springfields plant), waste management (Sellafield), and the energy planning situation in England, Wales and Scotland. Out of this process it identified that its strategy would be to extend life where it is safe and economically viable to do so, because it offers the nation extra low-carbon electricity generation, security of supply, jobs and other benefits, and of course financial rewards. The programme led to a revised expectation of an average seven-year lifetime extension. This decision was not intended to be a tide-over strategy until nuclear new-build comes along, since it rests on its own merits, Houlton says. It also led to the establishment of a lifetime programme to manage the process across the entire fleet, and to direct work programmes such as maintenance, training and recruitment, supply chain engagement, and contact with the regulator and the national (electricity) grid, Houlton says.

In principle, most of an AGR plant can be replaced, except for key components within the reactor pressure vessel such as the boilers and graphite. The boilers -- or steam generators -- are subject to thermal creep because of the high temperatures to which they are exposed (~600°C). At Hinkley Point B and Hunterston, core temperatures were lowered a few years ago -- which had the effect of lowering reactor power output by 70% -- to reduce this effect. That strategy has proved to be successful, Houlton says.

There is no such treatment for the problems that graphite poses. "Graphite, across the AGR fleet, in most cases, will be the lead component in ending lifetime for our fleet," says Houlton. But he qualifies that by saying that graphite risk factors, of which the two primary are weight loss and brick cracking, are well understood. Weight loss is caused by radiolytic oxidation due to gamma irradiation in a CO2 environment, and is a problem because it steadily reduces the core's neutron moderation capability. Cracking is caused by material property changes in the bricks themselves due to fast neutron exposure, and due to shrinkage, and it weakens the graphite block structure, which is load-bearing.

The first-generation Magnox reactors, which were also life-extended, faced similar challenges at the time. "EDF worked closely with Magnox in researching graphite and its properties. Although the AGRs are different reactors, they have some of the same issues, and we and others continue to support EDF," says Stephen Grant, Fraser-Nash power and energy director, who was involved in supporting operator Magnox South's work extending the operating lives of Oldbury and Wylfa power stations 10 years ago (with Serco, AMEC, Jacobs, Hyder and others). "Graphite is one of the big technical issues about continuing the life of Magnox and AGRs. They have always had a safety case to function, and [we] recognize that as they age, their characteristics change. To make sure it is safe to continue, we have to improve understanding; that is what this programme was about."

Dealing with graphite is a complicated issue, Grant says. "Graphite is non-linear. You can't say, 'this is what happened in the last six months, this is what will happen in the next six months.' We had all of this data, we actually had to bring in some real experts in statistics to help us rationalize the data to make it useful." Grant says that the plan was to remove irradiated samples that Magnox designers had the forethought to design into the core: "But it was such a large structure, and there are so many things going on, that there was a huge amount of data capture required," Grant adds. Cycles of data collection alternated with cycles of analysis and prediction. "The project was to measure where they had got to, and then project where they would be in the future. And then they measured to see how the predictions measured up with reality. That gave us increased confidence."

Houlton at EDF Energy cautions that current understanding of graphite failure mechanisms, which is based on inspection data, is dynamic. "As we are at the leading edge, our understanding might change; we need to maintain it over time," he says.

EDF Energy carries out inspections (visual and NDT), takes samples and performs analysis on those samples, using them to develop forward-looking computer codes to model how cracking develops. There is also R&D; for example, shaker-table testing to model how cracked bricks might stand up to a seismic event. In the run-up to the Hinkley Point B/Hunterston B life extension decision, core inspection was carried out during outages. For example, EDF Energy said in 2012 that during a three-month outage at Hunterston B2, 31 core channels (10%) were inspected. (That outage, which cost £35 million, also saw the replacement of a station transformer and four large gas circulators).

Inspections are intricate and difficult, Houlton says. "On all inspections, we deploy probes and instrumentation into a relatively small route into the graphite moderator that is many metres wide and many metres deep. Conducting the inspections is not easy, and we have had to develop tools and mechanisms to do this work, both for graphite and for boilers as well. We actually have in-vessel inspections: with boilers, we send people into the vessel to conduct inspections."

Despite the difficulty of the sampling work, the EDF Energy research led to the first announcement of a revised, and probably final, life extension for the two AGR stations that were the first to start up, Hinkley Point B and Hunterston B. Although they share common operating principles, AGR reactors were in fact built in four stages, two stations at a time, by different construction companies to different detailed designs, over a 20-year period. Other revised life extensions are expected to follow in due course for younger station pairs.

Houlton explains: "To our best judgement, the end of life is 2023, after which point the increasing frequency of inspection and examination could lead to an uneconomical situation [by increasing the requirements for downtime]. Or there could be further examples. If they are reaching near the end, and one of the transformers goes, it would be uneconomic to replace with only a few months or years left to run. Probably economic factors would take the stations offline, not the underlying irreplaceable systems." 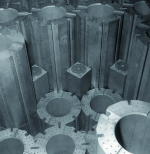 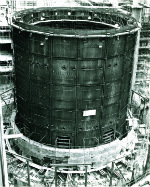