Tony Roulstone looks at the economics of small modular reactors and the conditions needed for them to become competitive with today’s larger reactor designs.

Interest firstly in the USA and now in the UK in small modular reactor (SMR) designs is driven by the very high cost and long duration of projects like the EPR planned for Hinkley Point. Such projects are just too large for even the largest utility and they take too long to be able to respond to changes in market demand. Because of their smaller scale, (less than 300MWe), the investment for an SMR will be smaller and they should be built more quickly.

SMRs can be built where the level of demand is smaller, more in line with their power output. Or, if the demand is larger, a series of SMRs can be constructed rather than one large reactor.

In 2014, the case for SMRs in the UK was examined both by a parliamentary committee and by industry. Each concluded that SMRs based on well-proven light water reactor technology could be considered for the next phase of UK nuclear investment, after the 12 large reactors planned for construction during the next twenty years.

Nuclear power economics depend on three broad types of cost, in the approximate proportions:

The unit fuel and waste costs of SMRs will be similar to larger reactors. There are some specific manpower challenges in operations and maintenance costs. The prime factor for SMRs, like larger reactors, will be the high cost and long duration of construction. Doubts about the economics of SMRs are first and foremost doubts about construction cost. Unless these costs can be reduced as reactors become smaller, SMRs will not be economic.

Power scaling is well known in the energy sector. As units of a similar design increase in size, their cost rises more slowly and unit costs fall.

This effect could make the unit capital cost of a 200MWe SMR more than double those of a 1000MWe reactor. But doubts have been raised about the correctness of the index values employed in these estimates. Many of the cost studies relate only to the USA and specifically to the early part of the programme in 1970s. Some of the data appear to be either from non-nuclear sources, or from other estimating methods. More significantly, scaling index is derived by separating the reactor scale and construction duration as independent variables.

This strong power scaling effect is not present in later and larger studies of the cost of US reactors. It is clear that larger reactors take longer to build because they are more complex. Therefore scale and duration are not independent. When these two variables are combined, the effect of scale on cost is much smaller than previously thought. Power scaling effects may even be negligible, because all the predicted savings from increases in size are offset, either by extended construction duration or additional safety enhancements required for these larger reactors.

Similar cost trends with low or negligible cost scaling are seen in other published studies from France, Japan, UK, Canada and South Korea, covering almost 200 of the over 400 power reactors built. Nuclear power scaling effects are either small, or are completely absent.

Opportunities for learning and productivity improvement arise from the larger numbers of SMRs required to provide a fixed amount of power. Series production of a common design leads to lower costs. Also, there is the potential for enhanced learning from factory construction, made possible by their smaller size. Manufacturing learning leads to progressive improvements in productivity and progressive reduction is cost, expressed as:

Man-time cost falls at a fixed rate % (?) as volumes double

where ? % production time saving for b doublings of units or volume, with ? - Wright Progress index. Learning rate = 1-? being in the range 10-30%.

Learning rates of double-digit percentage are seen across many manufacturing industries, including those that have relatively low volumes and large sizes similar to nuclear power. Two summary studies (see Table) covering many other investigations and industries support this effect.

Nuclear industry learning rates are much lower at 3-5%. Why?

Many observers have commented on the low productivity of nuclear construction, caused by the constant evolution of reactor designs with many local and site-based variations. Also, the long periods between projects, their geographic dispersion and the desire to employ local staff, mean that lessons learned on one project are forgotten. The constant drive to increase the scale of nuclear reactors tests the limits of knowledge and manufacturing on each new reactor.

The large size and complexity of construction sites inhibits communication, coordination and learning. Finally, the stringent and intensive quality processes required for nuclear safety challenge the skills and experience of construction staff, most of whom have never built a nuclear power station before. It may be said that nuclear construction provides ideal conditions for forgetting rather than learning. SMRs seek to address this issue by designing reactors for manufacture in factories and assembly on site.

Much recent development in SMR design has been in the US led first by Westinghouse with variants ranging in size from 50MWe to 225MWe. NuScale and mPower gained US Department of Energy funding for their reactor designs. All of these are integral PWRs with the core, steam generators, pumps and pressuriser integrated into one vessel. Most designs make some use of natural circulation cooling, for power operation or decay heat removal. Integral construction and passive cooling are significant ways of reducing cost. The same factory that constructs reactor vessels can make the other components and the assembly is delivered to site either by barge or rail.

Until SMRs are built in sufficient volumes, it will remain unclear whether they have conquered the cost problem. A study at Carnegie Mellon compared estimates of the cost of the Westinghouse and NuScale SMRs, and a current large reactor, by 23 experts. On the average of estimates, it suggested cost scaling effects have been largely offset with a scaling index -0.2 (50MWe) to -0.1 (200MWe). Learning rates are expected to be in the range 7-9% and the experts agreed that SMRs would have a 36 months construction time, as opposed to 60 months.

If these studies show what is possible, what are the conditions for SMRs to become competitive against today's large reactor designs? Simple modelling of SMR cost trends, compared with mature large reactor designs, gives some useful indications. The larger number of SMRs required to provide capacity offsets any power scaling effect. Some examples are shown in Table 2.

With values of the power-scaling index in the range -0.35 to -0.2, it is not possible for SMRs to be lower in cost than conventional large reactors without enhanced rates of learning. If learning rates are at least 7.5% and power-scaling index is relatively low (-0.2), SMRs can achieve lower unit investment costs than large reactors. The generating capacity and number of reactors to achieve such lower costs is not large: 2800MWe (fourteen 200MWe reactors) for low scaling (-0.2) with a mean value of 7.5% learning rate. Every reactor beyond this number will have lower unit capital costs than a mature large reactor and these costs will continue to fall as more SMRs are produced.

The design focus of current SMRs appears to be on the reactor system. This is understandable both because it is the natural interest of nuclear engineers and because of the need to gain safety acceptance of the concept. However, the reactor system is less than a third of the costs of a typical nuclear power plant. All parts of the plant need to be considered to achieve the target learning rates applied to the whole project cost.

SMR designs are evolving and as yet none have been built. The layout of the reactor containment and power plant buildings will continue to change. Current reactor arrangements such as the Chinese ACP100, and others designed in the US, surround an integrated and engineered reactor system with a conventional reactor containment building. This is most likely to be constructed using site-based methods. If so, the high costs of the building and associated mechanical, electrical and control systems will make it impossible to achieve economic targets for scaling and learning.

US designed SMRs have considered the issues of transporting large reactor components between factory and site. But they do not appear to have considered offsite manufacture and transport of the rest of the plant so thoroughly. Also, the transport system in the US with its many wide rivers and generous gauge rail systems is not replicated elsewhere. If SMRs are to access wider global markets, other transport considerations need to be assessed.

The means and methods of manufacturing learning are well understood. Learning results from having a single design manufactured repeatedly in the same factory, with strong economic incentives to improve productivity. The methods of cost reduction are well known. These include: design with the production processes in mind, use modern tools, automate, jigs and fixtures, arrange production for flow, integrate the supply chain for material and component supply and measure and feed back on production performance. But challenges remain. How will the nuclear industry change from its fragmented design and construction approach, where some parts of the power system are designed to precision standards (reactor core and vessels) and other parts (containment building and the related systems) are left to site teams to detail and construct?

How will a sufficient volume of SMRs be ordered and produced if the designs remain specific to a single country? How can a SMR design be made identical for different countries each with their different safety regulations and standards?

SMRs can in principle be designed to compete with larger reactors on capital costs. SMR designs need to meet two conditions. They must have simplicity at the heart of their concept, which allows much of the complexity of modern reactors to be avoided and will result in a lower power scaling effect. SMRs must be designed at the outset for factory construction and the design-for-manufacture approach must be applied across the whole power plant, not just the reactor and turbine systems.

Meeting these conditions will allow us to address the industrial questions, which then become the keys to competitive SMRs. Can SMRs be made in high volumes, constructed in many countries and in ways that satisfy a variety of regulatory systems?

Other industries such as civil aerospace have made this major transition, in the decades starting in the 1960s, from many high-cost bespoke designs to standard and economically efficient aircraft and mass air-travel.

If positive answers can be found to these business problems, rather than engineering and scientific questions, SMRs will have a bright future. At least one way of dealing with the perennially high cost of nuclear power will start to be realised.

Tony Roulstone established and teaches on the Nuclear Energy masters programme at the University of Cambridge with research interests in the economics and safety of nuclear power. Previously, he was MD of Rolls-Royce Nuclear. 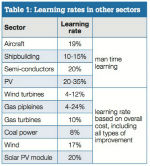 Table 1: Learning rates in other sectors