Emergency Core Cooling System sump strainers must provide a reliable flow of coolant to the reactor vessel during a LOCA. We review some of the latest offerings on the market. In an emergency loss-of-coolant accident, water inside the primary containment vessel collects at the sump, where it is recirculated for core cooling. In such a situation, conditions inside the PCV would be chaotic, and jets of water or steam from a broken pipe might dislodge fibrous insulation material from pipe lagging. The USNRC has argued persistently that clumps of insulation could block the sump, just like hair clogs a shower plug hole. The issue was flagged as Generic Safety Issue 191, and has affected both BWRs and PWRs.

In February 2014 the USNRC announced that Duke Energy's PWR-based Catawba Nuclear Station in South Carolina had met its requirements. A Catawba spokesman said that it had solved the problem by working from both sides. "First, we redesigned our ECCS sump strainer, which gave us a much larger and more effective strainer. We also removed insulation, which helped reduce potential debris generation. We did multiple and significant testing to prove the performance of our newly-designed strainer as well as completed several calculations evaluating the effectiveness of these newly-designed strainers," said Scott Andresen.

Emergency core cooling sump strainers consist of racks of multiple perforated steel disks upstream of the sump. In an emergency, as water flows through the disks to the sump, entrained fibres deposit evenly over the perforated surface, reducing the degree of pressure head loss caused by the debris bed. Head loss could risk damaging the sump pump through cavitation.

The NRC said in February 2014 that simply increasing the size of PWR strainers may not be an adequate solution to the problem because the chemistry of cooling water can interact with plant materials to form what it called, non-technically, 'a gooey mess' that could block even these larger strainers.

Transco has modified its emergency core cooling system sump strainer design to respond to these issues. "Everyone uses perforated plate, but with different geometries. We have changed the geometry, the way we bend and break strainer surfaces, to better accommodate chemical effects and the original debris load," said Nathan Miller, Transco director of sales, marketing and business development. Its filters are cylindrical rolls of filter mounted in a square or oblong water box. Filters may be one or more layers of perforated plate.

According to Patrick Reyes, project engineer at strainer supplier Performance Contracting Inc (PCI), the US industry is waiting for the results of probabilistic risk analysis research on sump clogging currently being carried out by South Texas Project.

PCI's Sure-Flow sump strainers have holes ranging from 0.045-0.09 inches (1.14-2.23 mm) in diameter. Its stack of 30 strainers features a patented core tube to control flow to the disks to maintain even flow. If the debris bed does not form evenly, there will be some high-velocity points on the strainer, which will naturally pull through more fibre, called 'bypass,' through the filter. Those fibres end up circulating through the core, and end up blocking the ends of fuel assemblies, threatening their safe cooling.

"Bypass is the next big issue in emergency strainers, Reyes says"

Bypass is the next big issue in emergency strainers, Reyes says. Current USNRC limits are 15g/fuel assembly, based on generic testing. Once a debris bed is built up, it will filter out fibres from the cooling water. But in the initial stages, entrained fibres will pass through the filter. PCI has developed another way of filtering out bypass, its so-called Sure-Trap, which consists of a secondary wall of filter material arranged in a series of weirs (L-shapes). Initially, water will flow directly through the unclogged secondary filters to the sump. Once a debris bed builds up on the secondary filter surface, it still allows a flow of water through the weir arrangement. PCI is also looking at inserting other materials inside the strainer to trap fibres as the water passes through.

Transco has designed and tested additional secondary filtration systems to deal with bypass, and is currently doing further analysis on them, Miller said.

CCI Thermal's emergency core cooling strainer for the CANDU 6 reactor has a similar modular design to that of Transco. A single filter module consists of a round plate top and bottom with a perforated steel plate that accordion-folds as it wraps around a cylindrical core. Thirteen of these modules are arranged in a column; a row twelve columns forms an assembled strainer. The CANDU 6 ECC strainer contains 21 such strainers in an oblong box 9m x 2m x 1.75m. The system supports a design flow of 4500 GPM (284 L/sec), design temperature of 650°F (343° C).

French manufacturer Bertin Technologies supplied sump strainers for the Olkiluoto 3 EPR, meeting new demands for a longer service period and a more corrosive environment than previously. The company's services extends from initial sizing in line with NUREG guidelines through design and manufacture of PWR filters.

Miller at Transco said that utilities are also replacing insulation to reduce the quantity of debris that could be created in an accident. Both Transco and PCI offer reflective metallic insulation that fastens over pipes and vessels and does not clog the sump in accident conditions.

By Will Dalrymple, editor of Nuclear Engineering International. Follow Will on Google+ 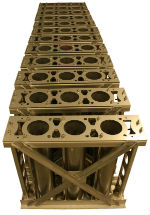 PCI’s Sure-Trap Pre-Strainer mounted above and to left of strainer. Even if filters were to become completely blocked, a clear (if circuitous) path remains for water flow to the strainer.
Post to: