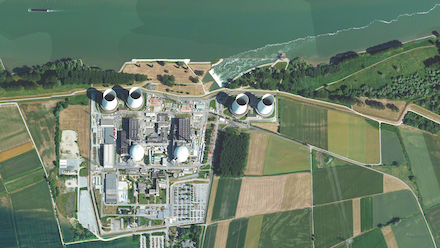 Above: Aerial view of the Biblis nuclear power plant in Germany, which is undergoing decommissioning

THE DIGITAL TRANSFORMATION OF NUCLEAR power plant management has recently been at the centre of the Nuclear Energy Agency’s (NEA) attention. The Agency has addressed the adoption of advanced technology throughout a nuclear plant’s whole lifecycle, including design, construction, operation and dismantling. But planning for digitally controlled operations and 3D models at the decommissioning stage of the cycle, or upgrading existing units, requires a high level of engineering ingenuity and new understanding of the value of data — and that with immediate effect.

These were some of the points that experts attending a recent NEA webinar “Digital transformation — opportunities and challenges for the nuclear sector” made during a debate.

One of the experts from Germany, a country in which all operating reactors must close no later than the end of 2022, has thrown a fresh light on the process, which requires fast action and a lot of newly qualified engineers. “In Germany we need to divide technologies, as all our plants are unique, so it is a big challenge to dismantle all sites safely,” said Thomas Hassel, head of the Underwater Technology Centre at the Institute of Materials Science at Leibniz University in Hannover.

Between 2011 and 2021, Germany closed eight reactors, reducing the share of nuclear power in its electricity mix from 25% to 10%. The six remaining units have a total capacity of 8545MW. Brokdorf is expected to close by the end of this year, followed by Emsland, Grohnde, Gundremmingen C, Isar 2 and Neckar 2. These closures represent a significant challenge as they are being done at the same time.

“We need to take materials to put in the recycling storage without any radiation and environmental damage,” said Hassel. “So, we need to access the grid in different areas through conceptual planning, disclosure and dismantling concepts.”

Hassel added, “I am engaged in engineering education, so we need a lot of engineers to work in decommissioning. Safety is most important in that process, i.e. we need to ensure safety against radiation requiring robust technologies.

“Namely, we need metallic and non-metallic structures to be dismantled, so the technologies have to be fully automated, and we have to find a storage for all the materials using cutting procedures.”

He added that, “what we are doing now is separating the first decontaminated material, distinguishing between low and high dose contamination material and then having different cutting procedures, whereby those taking place under water are controlled digitally. All dismantling is unique, while the degree of automatisation is high, as we have to minimise radiological risk and also for making the process robust.”

Hassel said digitalisation is key to resolving this problem. He said “documentability of what we are doing is also important if you want to transfer the data to the next project.” This includes hybrid cutting of thick components and cutting under water, developments that are funded by the German federal government, the Institute of Materials Science, Leibniz University Hannover and the German nuclear power decommissioning body (GMBG).

Hassel said that in Germany underwater structures, especially the reactor pressure vessel, are the focus of digitalisation efforts, because they are contaminated and therefore the most expensive and hazardous processes to manage.

Making savings prior to decommissioning

Digitalisation of new nuclear power plants has already taken place at the early stages of planning and design and well before decommissioning, as happened in Germany.

For existing plants, it requires a culture change that must go through the whole organisation. A company such as EGIS, a French company for new nuclear, has been involved with the design of three generations of plants, and their digital transformation. These projects include Hinkley Point C, which represents the first 3D EPR design, and then EDF’s latest generation of EPR reactors in 2020.

Jennifer Edey is vice president, site services at Canada’s Bruce Power. Bruce is extending the life of some units its the 6400MW Bruce nuclear complex in Ontario, which produces 95% of the region’s carbon-free electricity. She said that with digitalisation, the project will provide better value.

“Enterprise alignment was needed to go ahead with digital transformation. We did not treat data as an asset in the past, but as nuclear operators we use a lot of data, but we need to use it and thus make better decisions, it works like AI on real data, which produces a great effect,” Edey said.

She said, “Data and digital transformation are critical for alignment and last year we established a digital data governance twin, whereby data access rights are managed,” adding, “The rest of the organisation looked at digitalisation of nuclear power plants as an IT issue, not as a business solution, as a result, the whole company needs to understand that digital data is critical. So, a further direction from the senior executives was needed, as IT specialists can manage, but the biggest investment is in creating the governance for digital management such as platforms.

“Mostly, we needed to treat the data as an asset, not just a base for the applications, which unlike data, come and go. So, we created data owners, as they were the best people to engage the whole organisation as a huge amount of engagement was needed through investment and time to change the organisation. This means nuclear power plants digitalisation requires culture change and now mid-career people own the data.”

“Modernisation does not require heavy construction or major changes such as replacing the reactor core, building a new reinforced building, or laying a lot of concrete,” said Austin, “It primarily entails the installation of digital process controllers, computers, and servers.”

Austin does not see any technology barriers that would prevent nuclear plants from reducing their operating costs by 50%, but he said this is, “an assertion that EPRI needs to validate through research and testing.”

Austin suggested a consolidated approach to digitalisation by the nuclear power industry and listed several public websites where all nuclear players can compare their work.

The digitalisation process includes 3D virtualised versions of nuclear plants created by machine, which allows corporations to access the data from a distance using simulators with large screens and displays. This leads to new 3D management certification programmes, enabling engineers to look at the plant digitally, where the difference, if any, between the design model and the plant parts can be measured in centimetres.

However, opening access to this valuable data poses security and regulatory challenges. Vincent Champain, Framatome’s senior executive vice president, information technology, digital performance and new business, said that the difference between digitalisation in nuclear power and in other sectors is that due to security and compliance risks, there are limits to the ability to fully leverage the digital model, so different tools are needed.