Japan is pushing to lead the way on advanced and small modular reactors. The country has put it high on the list of its economic and societal reform plans. But whilst the desire to be a leader is there, the political will to lead by example remains a challenge. Andrew Tunnicliffe speaks with Keith Franklin of the National Nuclear Laboratory and Diane Hughes of NuScale. 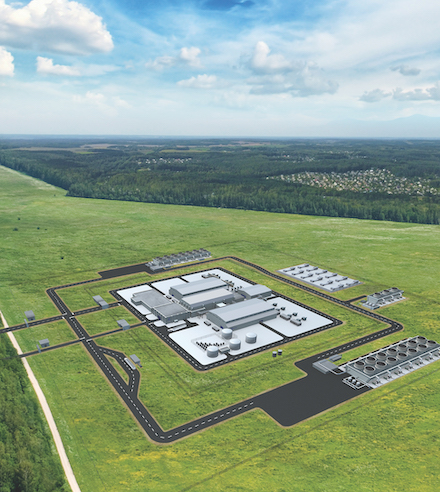 Above: Illustration of a NuScale power plant from 1000ft (Photo: NuScale Power)

THE JAPANESE EARTHQUAKE AND TSUNAMI, and the subsequent nuclear disaster at the Fukushima Daiichi power plant scarred the country. It not only wounded it geologically and by the loss of many lives, it also shook its economy and domestic nuclear sector.

“On the nuclear front, there are currently only a handful of plants operating in Japan, out of dozens which could be, and some plants have now been earmarked for decommissioning,” says Keith Franklin, head of international engagement at the UK’s National Nuclear Laboratory (NNL). “With this backdrop it is understandable that the Japanese government is looking to the future and the role in which new technology could play in the drive to net zero.”

Like much of the developed world, Japan is seeking to shape its future economy around climate and environmental goals — ambitious, but essential for the future of the planet — whilst quenching the unabated thirst for power. It believes the route is through future technologies such as advanced modular reactors (AMRs) and small modular reactors (SMRs). “Japan is one of the few countries in the world with a highly developed nuclear power station manufacturing base, and is ideally placed to be a leading country in the development of new technologies,” says Franklin.

In mid-June the country’s Ministry of Economy, Trade and Industry (METI) unveiled the latest version of its Green Growth Strategy: a plan it hopes will help it achieve carbon neutrality by the middle of the century. “Realising carbon neutrality by 2050 will require an enormous effort. We need to significantly accelerate structural changes in the energy and industry sectors, and [to make] bold investment to make innovation,” the Ministry said. “The Green Growth Strategy will produce and direct all available policies... and international cooperation towards that goal.”

Speaking of the updated strategy, METI Minister Hiroshi Kajiyama said: “Based on a recognition that 2050 is not the far future, but the near future, METI will definitely implement the Green Growth Strategy in cooperation with relevant ministries and agencies.”

Franklin noted insights related to the government’s thinking on the future of SMRs and HTGRs in the updated plan, adding it was a clear indication of what the future may hold.

At the end of 2020, the Japan Atomic Energy Agency (JAEA) announced it was intensifying its cooperation with the UK on high-temperature gas-cooled reactor technologies. A Memorandum of Cooperation (MOC) on Clean Energy Innovation, to work towards the development of new types of reactors including HTGRs, was reached between the two countries in 2019. The MOC signalled the beginning of collaboration between what the JAEA called “relevant public agencies, national laboratories, universities and private sectors” of both the countries.

The NNL became involved when it agreed to amend the technical cooperation arrangement to add a new item in the HTGR technology field, according to JAEA. “The UK wants to be at the heart of new developments in advanced nuclear technology, and partnerships with like-minded countries are an attractive route to take,” says Franklin. With the support of the Office for Nuclear Regulation, the partnership would help the UK and Japan further understand these advanced technologies and how they can be commercialised.

“Through this mechanism we are understanding more about Japan’s development of this technology through their high-temperature test reactor. It is important that we understand as much as possible about the development of all advanced reactor types all around the world, bearing in mind the commitment in the [UK] Energy White Paper to build a demonstrator AMR by the early 2030s,” Franklin adds.

The notion of Japan becoming the new frontier for a thriving AMR industry has long been held, with some success. The technology is, in the words of the World Nuclear Association, ‘numerous and very diverse’ but Japan’s recent advances are beginning to break through the complexity, with the country now looking to widen the appeal of its technologies; as the partnership with the UK illustrates.

It is not just the UK that is showing increased interest in what is happening in Japan. In May US-based NuScale Power announced it had received $20 million in funding from Japan-based engineering giant IHI Corporation, the second Japanese business to stake millions in as many months. Energy project engineering, procurement and construction contractor, JGC Holdings Corporation, invested $40 million just weeks earlier. IHI indicated it might double its funding in coming months.

Speaking about the potential of nuclear power, and SMRs, NuScale’s Diane Hughes, vice president of marketing and communications, says the company believes achieving global climate goals and decarbonisation cannot be done without nuclear energy as part of the equation. “Even with growing investments, renewables are still not capable of supporting 100% of our global energy needs,” she remarks, adding wind and solar also “face intermittency and reliability challenges”.

“SMRs add a reliable source of power to the grid that can be easily integrated into a renewables heavy system,” she continues. “This is why countries around the world, including Japan, are including SMRs in their climate action plans. They understand that new nuclear technology... is a cost effective, safe, reliable solution to decarbonising our global energy economy and addressing climate change issues.”

NuScale estimates the global SMR market will be worth over $100 billion by 2035. With more than 560 patents granted or pending in 19 countries, it says its domestic US supply chain will support the manufacturing for 36 modules annually — or three plants — and generate in the region of 13,500 jobs in the US alone. “Through strategic partnerships like the ones we recently announced with Japanese companies JGS and IHI, we expect to be able to support additional international deployments as well,” continues Hughes.

Since the disaster of 2011 Japan has been struggling to find an energy policy that sits well with industry, politicians and the public alike. In the wake of the earthquake the country shut down its nuclear power infrastructure. However, with no natural energy reserves, it has relied heavily on imported fuels and an increasingly active renewable market. Rising power usage, fossil fuel prices and challenging climate-related regulations have resulted in the country looking at other options.

One such solution has been to reconsider the mothballing of some of its nuclear plants, much to the scorn of many. In June Mihama 3 was restarted, 10 years after last being operational, according to owner Kansai Electric Power. Whilst the restart was sanctioned by authorities, the reception it elicited highlighted the perils the industry – in its former manifestation – faces. AMRs are undoubtedly critical to the future of nuclear in Japan and around the world.

For Franklin, partnerships like that between the UK and Japan and new technologies will secure that future: “Nuclear will play a key role in the UK’s drive to net zero. By providing clean, affordable and reliable energy, nuclear new build projects and our advanced technologies will make a fundamentally important contribution to our future energy mix.”

Hughes says there are many potential customers, from numerous countries, expressing interest in NuScale’s SMR technology. “They see what it can do — safety, cost and low carbon benefits — and they see the flexibility. What we’ve designed is a total game changer for the nuclear industry” she says. “NuScale welcomes the news that SMRs are a key part of Japan’s climate action plan... Since 2019, we have been collaborating with Japanese companies and participating in METI’s Nuclear Energy X Innovation Promotion programme, which supports accelerating the development of innovative nuclear technologies through funding support, access to R&D facilities and human resource development efforts.”

It seems the future of advanced and small modular reactors is a bright one. There is, however, a cautionary note from Franklin. He believes that challenges remain in the Japanese domestic market. “I think it is really important to understand the long-term impact of the Fukushima Daiichi accident” he says.

“It will take a long time for the public, and therefore the government, to change their views on nuclear power. Hence, we may find Japanese technology first being applied overseas before it is deployed in Japan.”

Want to learn more about small and advanced reactors?

Join us on 4th November for Nuclear Engineering International’s Small and Advanced Reactors virtual event that will look at the development plans and licensing activities for a range of small and advanced reactor technologies. It will cover all aspects of industry, with insight from reactor developers, utilities, supply chain and more.