The reactor vessel and internals of this Spanish PWR will be sectioned in the spent fuel pool, transferred in a shielded container and then boxed for temporary storage in its old turbine building. By Manuel Rodríguez, Manuel Ondaro, Jorge Borque and Nieves Martín

ENRESA is the company responsible for managing all radioactive waste produced in Spain. In fulfilling its mission, in February 2010 it began to decommission the José Cabrera NPP (Almonacid de Zorita, Guadalajara, Spain), the first NPP to commence operations in the country, in 1968.

The José Cabrera consists of a pressurized water reactor, a closed cooling loop, a turbine-generator set with an electrical output of 160 MWe, and all the auxiliary systems required for operation. The reactor was shut down, on 30 April 2006. ENRESA is responsible for the site until the end of the dismantling and decommissioning work in 2016, after which the site will be returned to its owner (the electricity utility Gas Natural Fenosa).

Following a series of preparatory activities during the first two years (2010-2012), work is now focused on segmenting and conditioning waste from the reactor.

The project demands a workforce of about 250, 30% of which are involved in supervision and safety. The main contractors are Westinghouse, responsible for the internals reactor and reactor vessel segmentation, and ENSA, in charge of radiological dismantling.

The José Cabrera Nuclear Power Plant Decommissioning and Closure Project is conceived as an industrial process with the aim of releasing the site for unrestricted use by the owner, together with proper management of the resulting materials, and it is subdivided into steps.

One of the most important tasks during the preparation phase has been refurbishment of the plant's former turbine building to convert it to the renamed Auxiliary Decommissioning Building -- ADB. The ADB's mission is the conditioning and storage of radioactive waste extracted from the containment building and arriving through the transfer tunnel connecting the two enclosures. To achieve this, the ADB is equipped with decontamination workshops, installations for waste conditioning, and temporary storage areas for containers, prior to shipment to the medium, low and very low activity waste storage unit that ENRESA operates at the El Cabril installations (Córdoba).

In parallel with some of these tasks, during the first few months of the project the cooling towers were demolished and the former emergency diesel generator and transformers were dismantled.

The José Cabrera nuclear plant dismantling project has achieved its most significant milestone: segmentation of the internal components of the reactor. Once the task of adapting the containment building was completed, in March 2012, the reactor top was lifted to remove the upper internals and begin the decommissioning programme.

Cutting operations are performed under water using equipment designed specifically for this project, and with the support of a system of underwater television cameras. Cutting tools include mechanical disc and band saws and drills. Work began on May 2012 on the upper internals, upper support plate, upper support columns, upper instrumentation column, control rod guide tubes and the core-top plate, whose function was primarily to facilitate entry of the control rods into the reactor core, in order to transmit the loads between the components of its upper area.

After the upper internals had been cut, the lower internal components of the José Cabrera nuclear plant were cut. This is the most active area, as it housed the fuel needed to produce the nuclear reaction. The set consists of several parts: core barrel, baffle, formwork, thermal barrier, lower core plate, lower support plate and instrumentation equipment, etc. These components are used to fix the fuel inside the reactor, serve as shielding, and to facilitate circulation of the primary circuit water.

The cut parts are collected in wire baskets on the bottom of the pit where the segmentation tasks are performed. There are two sizes of baskets: CE-2a (1.8m x 1.8m x 1.8m) and CE-2b (a half-height version of the same). A shielding device, called a transfer bell, a 35-ton hollow steel box (2.2 m x 2.2 m footprint) with detachable bottom removed, is lowered over the basket by a crane in the reactor building. A fastening tool grips the basket, and then bell and waste are raised out of the pool and on to the bell lower cover resting on a rail cart. The entire assembly is rolled out of containment and into the transfer tunnel of the auxiliary decommissioning building.

In the transfer tunnel, the bell is lifted up, and the bell lower cover on a rail cart is moved out of the way. Then an empty concrete CE-2a or CE-2b waste cube, also on a rail cart, slides directly underneath the bell, and the bell is lowered on to it. An electro-pneumatic system lowers the waste basket into the CE-2 container. Then the bell will be reassembled and returned to containment, and the CE-2 container will slide to a weighing station, be injected with light mortar (about 3m3) from a concrete batch plant located above the transfer station, and then have a cover attached. The total weight of the conditioned container will not exceed 25t. Then a door will open in the ceiling of the transfer tunnel and the box will be lifted into a central intermediate store and stacked in a seven by three grid. The store is in the centre of the ADB, isolated from the rest of the building by the original massive reinforced concrete pillars on the sides, and by a series of concrete slabs laid over its roof by the overhead crane. All of these operations are carried out by remote control from an operating room in the ADB.

It is expected that reactor internals will require 10 CE-2b and 1 CE-2a containers, the reactor vessel 15 CE-2b and eight CE-2a containers, and primary-circuit components such as the steam generator, pressurizer and pumps 40 CE-2a containers. In addition, other waste, (greater-than-class-C) will go into four HI-SAFE dry containers (transferred out of containment in a GWC capsule, and then stored with the spent fuel dry casks on site). To date, ten baskets have been conditioned.

This is an edited version of an article from the October 2013 print/digital issues of NEI (pp34-36). The full version is available to subscribers.

CE-2a and -2b waste baskets 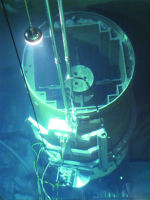