Following the German government’s decision to reactivate its previous nuclear phase-out plan, its nuclear power plants are counting their days. A 2012 report from the German nuclear technical support agency GRS outlines the German decommissioning market and its rules and regulations.

In mid-2011, 16 nuclear power plants (power and prototype reactors) have been in different stages of decommissioning in Germany. In 2011, another eight reactors were finally shut down and decommissioning will commence in the next few years. The remaining nine plants will be finally shut down in a stepwise process until 2022 due to the amendment of the Atomic Energy Act of July 2011; one plant each by the end of 2015, 2017 and 2019 and another three plants by the end of 2021 and 2022. These plants will also be decommissioned after their final shutdown. More than 30 research reactors of different size and more than 10 nuclear fuel cycle facilities were finally shut down and were or will be decommissioned. At the site of the Greifswald nuclear power plant (KGR), Europe's largest decommissioning project is being undertaken.

The map, right, gives an overview of the facilities under decommissioning in Germany in mid-2011, or already dismantled completely. In addition to the power and prototype reactors, these are research reactors and nuclear fuel cycle facilities. Not shown are facilities finally shut down, but not having been granted a decommissioning licence yet.

The course of each decommissioning project, its financing, the choice of decommissioning strategy and many other conditions strongly depend on the type of facility and on the owner. Power reactors and plants for uranium enrichment and fuel fabrication belong to the power utilities and the companies operating in this sector. Research reactors, prototype reactors for electricity production and prototype nuclear fuel cycle facilities are, on the other hand, established at research centres or universities. They are financed publicly. The decommissioning of the Greifswald and Rheinsberg nuclear power plants of the former German Democratic Republic (East Germany) is financed from the federal budget, just as the decommissioning and remediation of the uranium mining and processing facilities of the 'Wismut' in Saxony and Thuringia.

Experience has shown that decommissioning of a power or prototype reactor will take about 10 to 20 years, while the amount of waste can differ significantly.

There are two different strategies according to which decommissioning is generally performed: immediate dismantling or dismantling after safe enclosure. Common to both is that between final shutdown and start of the actual decommissioning there is the so-called post-operational phase, which may last several years. During this period, the fuel assemblies, whose activity inventory in the fuel assemblies is 10,000 to 100,000 times higher than the activity inventory present elsewhere in the facility (1020-1021 Bq) can be removed, or the operational media and waste can be disposed of as far as covered by the operating licence for the nuclear power plant. In this phase, the radioactive operational waste is often removed, too, which also accounts for a large fraction of the activity inventory. These measures reduce the radioactive inventory to about 1/10,000th of its original value. The major part of this activity inventory is fixed as activation in the structural materials of the facility in the core beltline region. At most, it can only be mobilised to a small extent. Not only the activation but also the surface contamination on components of the facility and surfaces of buildings contributes to the radioactive inventory that remains in the facility. Its activity is about 1011 to 1012 Bq and is thus again 100,000 times lower than the activation.

In the case of the alternative strategy, however, the facility will be dismantled only after a period of safe enclosure. In this process there are three distinct phases: measures in the facility for the purpose of establishing the safe enclosure, maintaining the facility in safety enclosure (for example for 30 years), and dismantling of the facility. The decision as to which decommissioning strategy will be implemented is taken by the operator of the facility within the scope of entrepreneurial responsibility. Each of the two strategies has its advantages and disadvantages that must be weighed up against each other in the particular case. Speaking at the international level, nuclear facilities are usually dismantled immediately. In Germany, there are also only a few facilities in safe enclosure (THTR-300, Lingen, FR-2 and FRN; see table).

*FRG-2 is part of a common facility with FRG-1, so only common decommissioning will be possible

The legal framework for the decommissioning of nuclear facilities results from the Atomic Energy Act (AtG). It stipulates that decommissioning is subject to licensing by the competent authority. The Basic Law establishes basic principles and provides that the Federation has the exclusive legislative power for the use of nuclear energy. In addition, to apply the provisions of the Atomic Energy Act more specifically, several ordinances have been issued. For decommissioning, the Radiation Protection Ordinance (StrlSchV), the Nuclear Licensing Procedure Ordinance (AtVfV), and the Nuclear Safety Officer and Reporting Ordinance (AtSMV) are of particular importance. The Radiation Protection Ordinance contains the definition of the radiological protection principles and defines the admissible radiation exposure limits. It also contains provisions for the transport of radioactive substances and the qualification of the personnel. The Nuclear Licensing Procedure Ordinance regulates the nuclear licensing procedure, the performance of an environmental impact assessment, and the involvement of the public (public participation) within the framework of nuclear licensing procedures. Regulations of the reporting criteria for reportable events at nuclear power plants are included in the Nuclear Safety Officer and Reporting Ordinance.

In addition to laws, ordinances and general administrative provisions, there exists a whole range of nuclear regulations and guidelines of a predominantly technical nature. These become regulatory relevant by being referred to in the nuclear licences. Their task is to describe the state of the art in science and technology. These are recommendations of the Waste Management Commission (ESK), the Reactor Safety Commission (RSK) and the Commission on Radiological Protection (SSK), standards of the Nuclear Safety Standards Commission (KTA), and DIN standards. These also include announcements of the Federal Ministry for the Environment, Nature Conservation and Nuclear Safety.

If a nuclear facility whose construction and operation had been licensed according to the Atomic Energy Act is to be decommissioned, then the operator or owner of the facility has to apply for a decommissioning licence. The procedure for granting of a decommissioning licence and the interactions between authorities, independent experts, the general public and other parties involved are presented in the figure, below, and briefly explained in the following:

Parties involved in the licensing procedure 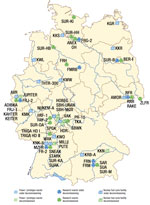