Counting the cost of cracking

The full extent of stress corrosion cracking at EDF’s reactors in France has still to be determined. Nonetheless, lower production as plants are re-examined has come at the worst possible time for the company. 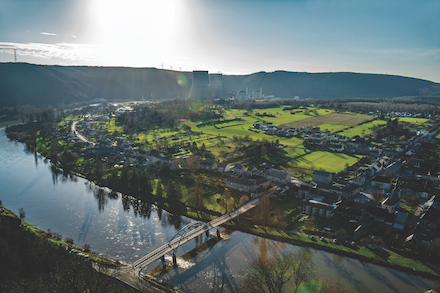 Above: One of the reactors at the Chooz nuclear power plant showed evidence of SCC

On 15 December 2021 EDF announced that it would temporarily shut down two reactors at the Civaux site. The move came after inspections undertaken as part of as Civaux 1’s 10-yearly in-service inspection revealed defect indications close to welds in pipes that formed part of the of the safety injection system (SIS). This back-up circuit allows borated water to be injected into the reactor core in order to stop the nuclear reaction and to maintain the volume of water in the primary circuit in the event of a loss of primary coolant accident.

The discovery illustrated the mixed blessings of a ‘series’ approach to nuclear build, as EDF decided that it should also investigate and, if needed, address the same problem at other reactors in the N4 series, notably at Chooz, where there are four similar reactors. It began an outage at Chooz 2 on 16 December and at Chooz 1 on 18 December.

At that time EDF said the extended outage at Civaux and the closure at Chooz would cost it about 1TWh in lost generation to the end of 2021. But since then the company has found the problem to be more widespread.

ASN (Autorite´ de Su^rete´ Nucle´aire), France’s nuclear safety authority, said analysis on parts of the pipes removed from Civaux 1 had revealed the presence of cracking resulting from an unexpected stress corrosion phenomenon on the inner face of the piping, close to the weld bead. There was worse news for EDF. The ultrasonic inspection, which had been carried out during the plants’ regular 10-yearly outages, is mainly used to detect cracking caused by thermal fatigue. It is less effective at detecting stress corrosion cracking (SCC). That raised the fear that SCC had been present in reactors that had previously been examined by ultrasound and indications of SCC had wrongly been classified as spurious. The re-examination of Chooz B1 and B2 indicated this was indeed the case and there was SCC that needed to be addressed.

All five of the reactors in the initial group have had to undergo additional checks to determine which areas and systems are affected by the stress corrosion phenomenon.

To make matters worse still, checks at Penly 1, during its third 10-yearly outage, revealed indications on the same pipes, which laboratory analysis showed to be SCC, albeit at a smaller scale than at Civaux 1. Unlike the Chooz and Civaux reactors, Penly is not one of the 1450MWe N4 series but a 1300MWe reactor in an earlier French series.

As a result, EDF has returned to the checks previously conducted on all of its reactors to re-examine the results, searching for indications then thought to be spurious but now seen as potential indications of stress corrosion.

In early May, speaking at an investor meeting after the company published results for the three months to the end of March, Regis Clement, EDF’s Deputy Head of Nuclear Generation, provided an update to investors.

He said inspections and examinations had confirmed stress corrosion in sections of piping at Civaux 1, Chooz 1 and Penly 1, where the affected parts will be removed and replaced. EDF had already begun investigations at Civaux 2 and Chooz 2 and now that has been extended to seven more units – Chinon 3, Cattenom 3, Bugey 3 and 4, Flamanville 1 and 2, and Golfech 1. Of these units, Clement said: “Indications have been found during ultrasound inspection process but we are not yet able to establish whether these are minor flaws in the composition of the steel, traces of thermal fatigue or stress corrosion.” Laboratory tests are under way.

In the end, EDF will inspect all its reactors. It expects that process to be completed by the end of 2023 and largely to be carried out during scheduled maintenance outages. Clement said, “At this time more or less 20% of the fleet is undergoing examination” and EDF expected to have a “high level of requirements” in controlling or remedying the problem.

The overall cost of assessing and remedying the problem cannot yet be fully assessed, according to Xavier Girre, EDF’s Group Executive Senior Vice President and Chief Financial Officer. He said, “we are still in an early phase during which we are assessing the situation about stress corrosion. It is too early to give you a precise assessment about the capex that will be needed.” But he told investors that a cost – albeit not precise estimates – had already been built in to financial guidance for 2023, and any loss of generation had been built into the nuclear generation goal for the year of 300-330TWh.

One problem in assessing the cost is that although the reactors are supposedly ‘identical’ within each series, in this case the problem and remedy has not been consistent. One analyst noted that repair outages varied, from five months at Civaux 1 to over a year for others. Regis Clement admitted, “there is no standard timing for compliance restoration work. It will really depend on each reactor situation.” He added, “There is no standard timing approach and it will really depend on the technical solutions that are implemented in each individual case. It is not a generic approach to our fleet.” He admitted that the company was still working on root cause analysis, but said “we are close to the end of understanding the situation of stress corrosion”.

Even at the first three reactors – Civaux 1, Chooz 1 and Penly 1 – the examination and analysis programme was not complete in late May.

The picture is complex though, because revenues were supported by the spike in electricity and gas prices which meant a good financial performance for EDF Trading. But EDF Trading had to work hard for its money: although some parts of the group benefited from the high prices, EDF had to buy power in the rising markets to cover the decline in nuclear production. The lower availability meant that in the three months of Q1 nuclear production in France was 91.7TWh, 7.5TWh less than for the same period in 2021. Revenue was down €50mn due to a reduction in the number of customers at the end of March 2022, compared with the end of March 2021, although there was an increase in consumption per customer.

Overall, in the first quarter of 2021 EDF was a net seller, the company said in its update, whereas in the first quarter of 2022 it was a net buyer. The decline in nuclear output (and in hydro generation), required the company to buy power at very high prices to fulfil its obligations. It said the cost of ‘buybacks’ due to missing nuclear volumes is estimated at around €14bn based on market prices on 21 April, 2022, and €16bn in mid-March. Overall, the company said, “2022 remains a very challenging year. The volatility in the markets remains extreme. The impacts of the Ukrainian conflict are difficult to quantify.”

Pinning down the extent of SCC is key to understanding the full impact on EDF but the likely need to make repairs across the fleet is coming at an unwelcome time for France’s nuclear ambitions.

Nuclear generation from EDF’s fleet has been declining over the last five years, falling from nearly 80 per cent in the early 2020s to barely the 70 per cent mark in 2020. Until recently, government strategy was to see it dwindle, to be replaced by a more mixed portfolio with wind and solar replacing much nuclear capacity. President Macron changed that in February when he trumpeted a nuclear revival plan as part of his re-election campaign. He put forward plans for six new EPRs dubbed EPR2s – a step onwards from the EPR still under construction at Flamanville – with a further eight in a follow-on series. Overall the plan would see France gain 25GW of new nuclear capacity by 2050.

That requires a big step up in France’s technical capacity, as was revealed in ASN’s annual nuclear safety report, presented to parliament in May. ASN President Bernard Doroszczuk warned that “What emerges more specifically from 2021, and from the second half of the year in particular, are the industrial weaknesses that affect all the nuclear facilities and the ongoing debate regarding the choices of energy policy and the place of nuclear power in these choices.”

He added, “The new energy policy perspectives, whatever they are, imply a considerable industrial effort to meet the industrial and safety challenges. If nuclear power is included among the choices made to ensure a decarbonised energy mix by 2050, the nuclear sector will have to set up a true “Marshall Plan” to render this prospect industrially sustainable and to have the skills that enable it to cope with the scale and duration of the projects.”

Macron said his new nuclear plan will be presented for broad public consultation during this year and up for debate in parliament in early 2023. Meanwhile, consumers across France (and Europe) are likely to be suffering energy price rises and shortages this winter, following on from the invasion of Ukraine.

Doroszczuk’s comment suggests Macron’s plan will require investment across the economy, offering both a cost burden and a potential economic boost associated with new nuclear.

It remains to be seen whether nuclear SCC investigations will damage the prospects for nuclear in France in future, or can serve as an illustration of the technology’s broader reliability and huge past contribution to French supply.