Researchers at NRG in the Netherlands are working on computer models and experiments to give insights into the core behaviour of the new generation of pebble-bed high-temperature reactors.

About three years ago, the Computational Fluid Dynamics (CFD) team at the Nuclear Research and consultancy Group (NRG) in Petten came up with a plan to study the heat distribution in the core of a high temperature reactor (HTR). Temperature measurements in fuel pebbles in the core of an old demonstration HTR (in Jülich, Germany) gave cause for this investigation. A number of measurements indicated high temperatures, which suggest that much higher temperatures can occur locally in the pebble bed than was thought. Although the higher temperatures did not lead to a release of radioactivity, they could undermine the safety philosophy of this type of reactor. Moreover, modern computational approaches need to be developed which provide much better insight into the cooling behaviour in pebble beds than the computer codes that were written decades ago.

The above-mentioned type of HTR typically has a reactor core filled with hundreds of thousands of spherical fuel pebbles the size of tennis balls and made of graphite, a good neutron moderator. Thousands of uranium particles are embedded in each of these fuel elements. In the opinion of experts, a fission reaction in an HTR cannot get out of hand because the pebbles never become so hot that they can melt, even if the cooling system fails completely. This is demonstrated in safety tests with HTR test reactors in Germany, China, and Japan. Furthermore, the design ensures that the fission reaction decreases if the temperature rises, as is the case in current reactors. In short, this is a passive safety mechanism that should prevent a meltdown.

But what if the temperature between the pebbles unexpectedly gets higher than envisaged, like in the German HTR? And how does the overall heat transport work in the core of such a reactor? The CFD team of NRG is well on the way to finding this out. According to Ferry Roelofs, CFD expert at NRG: "Since it is not possible to test the situation in practice, we are carrying out computer simulations of pebble beds. Within the THINS project sponsored by the European Commission, I worked out a strategy together with my colleague Afaque Shams and made a start. This way we show how the fluid and heat flows manifest themselves between the pebbles."

However, Roelofs had to have reference material to validate the computer simulations. "After a literature review, we had to conclude that there are no known experiments which can provide the reference data we need to validate our detailed computer simulations. Ultimately we decided to carry out a numerical experiment. This methodology is based on the fundamental principles of physics on a very small idealised pebble bed. To this end, after several months of preparation, we had around 60 computers make calculations for eight months."

After the first step with a single pebble in an idealised bed at reduced flow rate, which could be calculated using fundamental principles of physics, the next step is to add more realism. One way of adding more realism is to increase the flow rate. The computer cluster at NRG is not large enough by far to host such simulations. "However, our work has attracted the attention of Elia Merzari, Aleks Obabko and Paul Fischer at Argonne National Laboratory near Chicago. They have access to a supercomputer and are planning to rerun our simulations at higher flow rates. This will provide valuable additional information," says Roelofs. Another way of adding more realism is by simulating a limited-size randomly-stacked pebble bed containing about 30 pebbles. In cooperation with Danny Lathouwers and Dimitrios Pavlidis of the Delft University of Technology such a limited-size randomly-stacked pebble bed was created and preparatory work has started. Simulations were performed partly at the computer cluster of NRG itself. Simultaneously, in cooperation with assistant professor Emilio Baglietto from the Massachusetts Institute of Technology (MIT), additional large computations have been running on its powerful computer cluster for about six months. All of these simulations were finished in the summer of 2013, although processing of the huge amount of data generated will take another few months.

In the meantime, contacts have been established with a German research centre. In Jülich, the team of Stefan Kasselmann and Bärbel Schlögl have set up an experimental facility in which the flow around one or a few heated graphite pebbles can be measured. During the second half of 2013 they will try to create additional reference data to validate the models being used by the team at NRG, ultimately increasing confidence in the applied computational approach.

This step should be followed by a simulation of a limited-size randomly-stacked pebble bed with one of the sides simulating the reactor vessel wall, as this influences the pebble stacking and therefore the flow and heat transfer significantly.

NRG has been working on graphite dust modelling for about 10 years. In cooperation with the South African Pebble Bed Modular Reactor (PBMR) team, which was actively designing a reactor until 2010 when the project was put on hold, NRG colleagues Ed Komen and Marek Stempniewicz developed a computer tool which can track the transport of graphite dust throughout the complete cooling circuit. However, in order to study the deposition and re-suspension behaviour of graphite dust in more detail, CFD approaches need to be developed. Together with Thomas Barth and Gregory Lecrivain of the German Helmholtz Zentrum Dresden-Rossendorf (HZDR), a strategy comprising experiments at HZDR and CFD simulations at NRG and HZDR was developed within the frame of the European THINS and ARCHER projects.

Basic experiments were carried out in 2011 and 2012 to provide reference data for the validation of the CFD simulations. In 2013, realistic graphite dust was released in a small-scale graphite pebble bed. Measurements performed using tomography indicated where graphite dust accumulates and where it does not. According to Roelofs, "It will be challenging to simulate such experiments, but if we succeed, we will have unique validation of our simulation tools." 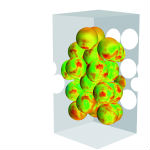 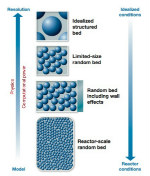 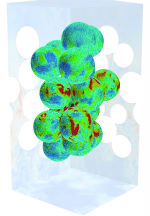 Complex flow patterns are shown on pebble surfaces
Post to: