The asbestos had been installed as three layers of magnesia flat blocks, which contained amosite and chrysotile asbestos, held in place by steel wire mesh. This was overlaid with a cement-based asbestos fibre (chrysotile) with a reinforced armouring compound and finished with 1.6mm aluminium cladding.

The plan was that once the asbestos was removed, it would be stored in 200 litre drums which would be placed in ISO containers before being taken and stored at the National Low Level Waste Repository (LLWR) site in West Cumbria. UK services contractor Hertel was responsible for the work.

Oxy-propane cutting was used to remove the asbestos from the side of the vessel. Once work was underway, the removal team found that the asbestos was breaking away from the original block and forming a powder-like substance. This created a much greater volume than anticipated; it also had an impact on the building's filtration system. An unexpectedly large quantity of sub-micron particles were being created, which passed through a pre-filtration system of momentum separators and cyclones. This led to the premature blinding of the building's HEPA filters. With the particulate matter being mildly radioactive, the standard 950 litre cylindrical blinded filters (623mm high with a 518mm outer diameter) were removed, compacted, double bagged and taken to a storage area. During the whole removal campaign around 750 filters were used.

An indication of the amount of powdered asbestos being generated came from an initial 11m3 area. This produced in excess of 15m3 of asbestos waste. The concern was that the amount of asbestos waste being produced was significantly more than projected and would markedly increase the number of drums needed to store the waste, which would impact on the storage room required at the LLWR. A solution needed to be found to minimise the amount of waste.

Discussions within the Hertel project team and with the United Kingdom Atomic Energy Authority (UKAEA) and consultants CH2M Hill examined the various options available for dealing with the excess waste. Among the options considered were offsite supercompaction, bringing in a supercompactor, bringing in a low-force compactor, and disposing of uncompacted waste in either grout-sealed boxes, or in half or third-sized ISO containers.

Initial findings showed that the chosen solution, low-force compaction, would cost-effectively reduce asbestos waste by an average of 60%. It would also allow the inclusion of other low-level waste from the decommissioning of the WAGR to be stored between the drum pucks in the ISO container. Testing determined that the right compactor to manage the volume of asbestos was the Orwak 2500 compactor.

Before compaction started, trials were undertaken with man-made fibres to ensure the integrity of the unit. It was found that the system presented a problem of airborne contamination, as standard filtration gave a higher than anticipated level of fibre escaping into the enclosure in which the compactor was sited. A design amendment was made to the drum lid and two designs of filtration systems tested. The first used a filter screwed into a threaded hole in the drum lid, but there were problems in displacing sufficient air during the compaction process. It was found that using a standard respirator filter, the same as those used for contamination protection, provided the ideal solution. This was fitted to the underside of the drum lid and was protected with a perforated steel cover to prevent it from being crushed during the compaction cycle.

After deciding on a location for the compactor to provide maximum protection, it was placed within a full asbestos enclosure with a three-stage air lock. For added protection, an additional filtration system with HEPA filters was included to provide a fail-safe system to prevent asbestos fibres escaping, should there be a system failure.

All drums were brought to the compactor, within the enclosure, using a pallet handler fitted with stops so a drum could be located whilst maintaining operator distances from any potential source of radiation.

During the process, a 500cfm (cubic feet per minute) extractor system in the asbestos enclosure minimised the opportunity for asbestos to escape. There was continuous air sampling, and an emergency protocol was established. Personnel and background radiation monitoring levels were found to be below detection limits.

During the campaign a total of 130m3 of asbestos was removed from the reactor vault. Some 460m3 of hard waste was also removed, including the steel structures. This process, established during the decommissioning of the WAGR completed in 2011, has set a template for removing asbestos insulation to give access to key equipment and structures as they are dismantled. 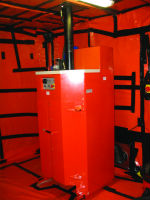 The compactor, as installed in enclosure