In 2014, the Netherlands’ only nuclear power plant began operating with MOX fuel. By Jan Wieman

The Netherlands has a single operating nuclear power plant, Borssele, which produces about 3.5 per cent of the country's electricity.

The Borssele plant is operated by Dutch utility EPZ. It is located on the same site as a 400MW coal-fired plant and a 25MW wind farm. Borssele was built between 1968 and 1973 and is expected to have a 60-year operating lifetime. It is due to close at the end of 2033. The plant is a 512MW pressurised water reactor, and over the last 15 years it has achieved an availability factor of about 90 per cent.

Since the nuclear programme in the Netherlands is so small, the government has set out a fuel cycle policy that is unique in Europe. All radioactive waste is stored above ground for a minimum of 100 years awaiting final geological disposal.

The government-owned Central Organisation for Radioactive Waste (Covra), operates an intermediate waste storage facility at Borssele, called Habog. It was commissioned in 2003 and is now receiving vitrified and other high-level waste resulting from the reprocessing of Borssele's used fuel at La Hague, as well as spent fuel from the country's research reactors.

In the first years of Borssele's operation, reprocessing of used fuel was not controversial. In 1978, EPZ joined a group of utilities that invested in building the UP3 plant in La Hague, which is dedicated to the treatment of used fuel arising outside France. In later years, for several reasons, some European countries moved away from reprocessing and opted for intermediate storage of used fuel.

In the 1990s, political opposition to nuclear power increased. This resulted in intensive legal battles between EPZ and the government over whether to continue operation of the Borssele plant. At that time the government delayed the shutdown date for Borssele in steps from 2004 to 2007 to 2014. But given the uncertainty about future operation EPZ's planning horizon was limited, and major investment in the plant had to be postponed.

In 2006, the government and EPZ finalised a deal (called the Borssele Convenant) that allows EPZ to operate Borssele until 2034. This was a real game changer: it meant that EPZ could optimise its fuel strategy for Borssele's final 20 years of operation.

Following the decision in 2006, EPZ initiated studies on the best alternative back-end solution for the final years of plant operation. The choice was between a move to disposal of used fuel, ending the reprocessing in La Hague, or moving to more complete recycling of the fuel, and using mixed uranium-plutonium oxide (MOX) fuel in the reactor. Both options involve significant investments, but the costs can be amortised over the next 20 years of operation.

The option to continue the treatment of fuel in La Hague has the big advantage that we know the processes, including fuel shipment, reprocessing and return of waste residues to Covra, are known and licensed.

EPZ assessments found that the cost of continuing fuel recycling would not be much different from the expected cost of direct fuel disposal. It also considers fuel recycling to be a responsible policy, which results in the smallest possible footprint for our industry. The waste solution for the residue is quite well accepted.

The main uncertainty in the reprocessing option was the fact that EPZ did not have a licence to load MOX fuel. There was also a timing issue to consider. It would not make sense to launch a MOX project if, when the reactor is shut down in 2034, there is still plutonium in the final core. The solution EPZ worked out with AREVA was a pre-cycling scheme.

The pre-cycling scheme has two steps.

EPZ does not want to have any plutonium left to manage when Borssele closes. In order to increase the rate of plutonium consumption enough to have a zero balance in the end, EPZ has designed an ambitious scheme of MOX loading. It will load 40 per cent MOX, containing 5.4 per cent fissile plutonium from 2014. This means that the reactor will have about 20 per cent more plutonium in the core than any other commercial light water reactor.

Designing a MOX pre-cycling scheme with AREVA was one thing, but the authorities had to license the use of MOX in Borssele.

EPZ started the licensing process in 2008. An environmental impact assessment was drafted and submitted for evaluation in autumn 2010. In 2011 EPZ received a MOX loading licence, but this was challenged in the courts. The licence became irrevocable in 2013, and the first MOX fuel was loaded into the reactor in June 2014.

Eight MOX fuel assemblies were loaded initially, with 12 due to be loaded in each subsequent refuelling outage if the pathfinders perform well during their first fuel cycle. Ultimately the reactor core will contain 40 per cent MOX (48 out of the 121 fuel assemblies will be MOX).

Over the lifetime of the programme EPZ expects that AREVA will deliver 600t of nuclear fuel for the Borssele plant, including enriched natural uranium, enriched reprocessed uranium and MOX. In turn, Covra will manage 225t of vitrified fission products and 350t of metallic waste.

Netherlands is the seventh country to use or have used MOX fuel in its nuclear reactors, along with Belgium, France, Germany, Japan, Switzerland and the US.

Jan Wieman is Fuel Cycle Manager at EPZ. This article is based on a presentation made at AREVA's international recycling day in Paris. 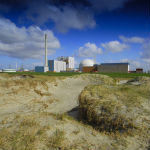 Covra plans to re-paint the Habog building every 20 years in progressively ‘cooler’ colours to represent the decay of the high-level waste.