By breaking away from mainstream fusion engineering, Tokamak Energy is aiming to bring new technologies into an established field to improve its performance, prospects and commercial potential. By Melanie Windridge and David Kingham

Fusion research proper began after the Second World War. George Thompson and Moses Blackman of Imperial College London filed the first fusion reactor patent in 1946, and throughout the 1950s, in the UK, America and Russia, there was increasing interest in the use of magnetic confinement.

Magnetic confinement is the use of magnetic fields to trap the fusion fuel, which is in the form of a super-heated, electrically charged gas called plasma that must be kept away from the reactor walls. The most advanced fusion machine used for this purpose is the tokamak.

The tokamak is a Russian design of a solenoid wrapped round on itself to form a torus (ring-doughnut shape) with a 'toroidal' magnetic field around the ring. This is combined with a current flowing through the plasma in the same direction, which produces a magnetic field that pulls the plasma away from the walls. Wide ring magnets called poloidal field coils are used for shaping the plasma.

These magnets and the vacuum vessel within form the inner workings of a tokamak, and even relatively small experimental tokamaks that do not create high temperatures for fusion reactions have engineering challenges with these devices.

Magnets for future power plants will have to be made out of superconducting materials so that they do not heat up. Superconductors have no electrical resistance when cooled down to temperatures close to absolute zero. They will be essential if a power plant is to operate continuously and not waste energy in resistive magnets.

The established principle for a future tokamak fusion reactor is that, under the right conditions in the inner vacuum vessel, deuterium and tritium come together to make helium and a neutron. The neutron, being a neutral particle, is not confined by the magnetic field and flies out of the vessel, captured in a surrounding blanket of lithium. The neutron reacts with lithium to make tritium, vital for future reactions, and generates heat. The heat is extracted from the blanket and used to make steam, drive turbines and generate electricity.

Moving from experiment to reactor is complex. Real fusion reactions will be happening continuously and the machine will permanently be under stress. For this reason, most experimental tokamaks operate with only one half of the fuel mix, deuterium, studying the plasma and improving conditions without producing the highest energy fusion reactions.

The fusion environment is extremely hostile. The interior of the tokamak has to withstand high temperatures, high magnetic fields and associated forces, and very high-energy neutrons. Moreover, a commercial reactor must be engineered to last, requiring advanced materials, sophisticated shielding and a design that allows for quick and easy replacement of vulnerable parts.

The neutrons from the fusion reaction cause changes in the crystalline structure of the machine walls and possibly the transmutation of elements. Steels become brittle, the structure becomes mildly radioactive and the magnets heat up - not a good thing when superconducting properties rely on extremely low temperatures. Blocks of shielding material such as tungsten are required to protect the magnets. The thickness of shielding required will be one of the limits on shrinking a future fusion reactor.

If we want to use the energy of these neutrons we need to design around them. Materials scientists are developing advanced materials to be more resistant to embrittlement and using elements for alloys that are "low activation", so that the radioactivity produced is minimal and short-lived. Despite this, once a fusion reactor has started operating its structure will become radioactive and humans will not be able to enter the space, even though the levels of radioactivity are tiny compared to fission reactors. Any future maintenance work will have to be done by remote handling, using robotic arms controlled by operators using video streams and real-time animations. Culham Centre for Fusion Energy has pioneered remote handling and been using it on the JET tokamak since the 1990s.

The requirement to breed tritium fuel adds a further complication. Tritium decays relatively quickly and does not occur naturally on Earth. Small amounts are available as a by-product from some fission reactors, but for long-term fusion operation we must make tritium by reacting the fusion neutrons with lithium.

Each deuterium-tritium reaction produces one neutron, so that neutron must breed at least one tritium nucleus for the power plant to be self-sufficient. It is unrealistic to assume that all neutrons will be absorbed and reacted in the blanket of lithium surrounding the torus, so a neutron multiplier such as beryllium will be included in the blanket. Beryllium reacts with a neutron to form two helium nuclei and two further neutrons, which can go on to react with lithium to produce two tritium nuclei. Designs for tritium-breeding blankets are still under consideration.

A question of size

Size is an important consideration when designing a commercial future reactor. Cost and time suggest it should be as small as possible, but it is dictated by physics and engineering considerations.

Traditional designs have moved to successively larger dimensions, culminating in the Iter experiment currently under construction in the south of France. This will be over 30m tall and weigh about 23,000t. The demonstration reactor that follows, dubbed Demo, will be slightly bigger. When Iter was being designed in the 1990s, it was believed that the only feasible way to increase fusion power was to increase machine size. But the size and complexity of Iter has led to very slow progress in the fusion programme. Scientists have been asking if there is a way to do things differently.
Tokamak Energy aims to accelerate development by working with new technologies to make smaller machines. By dividing development into a series of engineering challenges the team hopes to make faster progress. They have designs for experimental tokamak devices to get them past energy breakeven, and a concept for a fusion reactor that has been developed in association with Princeton Plasma Physics Laboratory in the USA. This reactor would be between 10 and 100 times smaller in volume than Iter.

In 2015 Tokamak Energy scientists published two peer-reviewed papers in Nuclear Fusion. One tackled the established notion that tokamaks must be huge to achieve a high energy gain. Alan Costley et al showed that it is feasible to build a 100MWe tokamak with a high power gain. Based on a new insight into the constraints on stable operation of tokamaks, the work is consistent with a database of tokamak experiments assembled during the planning for Iter. The second paper, led by Colin Windsor, tackled one of the toughest engineering challenges in a compact spherical tokamak - the shielding of the centre column.

Tokamak Energy's plans for size reduction are made possible by advances in superconductor technology. Higher magnetic fields equate to better confinement. Additionally, the use of high temperature superconducting (HTS) magnets opens up the possibility of using a more squashed-up, compact design - the spherical tokamak.

The spherical tokamak design was pioneered in the 1990s by Culham Centre for Fusion Energy. Tokamak Energy's technical director, Alan Sykes, was the driving force behind the programme. A spherical tokamak makes more efficient use of the magnetic field, which is strongest at the centre. It is inherently compact. Historically, this advantage has also been its limitation. The lack of space in the centre of the machine gives little room for magnets and associated protective shielding and temperature control. But now, rapidly-advancing "high temperature" superconductors can conduct high currents with zero resistance at temperatures well above absolute zero and in a strong magnetic field. This reduces the problems of cooling and protection associated with the energetic neutrons.

Tokamak Energy's strategy towards faster fusion is based on the combination of spherical tokamaks and high temperature superconductors. This approach is independently reinforced by work in academia. Two recent studies focus on the same material - the REBCO 2nd generation HTS tape.
A group from Durham University and Culham Centre for Fusion Energy examined the economics of fusion taking into account recent advances in superconductor technology. They found the prospects for cost of electricity from fusion to be favourable, and say that the advancing technology could make engineering of power plants more straightforward.

A group at MIT in Boston, USA, has also produced a design for a smaller, modular fusion reactor using HTS magnets and the spherical tokamak shape. They call it the ARC reactor ('affordable, robust, compact'). Professor Dennis Whyte, director of MIT's Plasma Science and Fusion Center and co-author of the paper with his design class students, says that the use of HTS "just ripples through the whole design. It changes the whole thing."

In July 2015 Tokamak Energy demonstrated a plasma for over 24 hours in a small tokamak with all magnets made from REBCO HTS.
Smaller devices should have shorter construction times and therefore less cost. Building small 100MWe units also gives more flexibility in operation. Units could be combined to make larger stations with more freedom to vary output and with redundancy to allow for maintenance and repairs. Additional benefit may be found by having a unit dedicated to tritium breeding alone, the remainder dedicated to energy production.
The Tokamak Energy plan aims to deliver a fusion power gain within 5 years, first electricity within 10 years and a 100MWe power plant within 15 years by turning the pursuit of fusion energy into a series of achievable engineering challenges, alongside HTS magnet development in parallel.

Fusion reactor design may be challenging, but the dream of fusion is a compelling one. The world needs abundant, clean energy, which fusion offers. The challenges themselves are interesting and exciting - indeed there are many who have forged fulfilling careers in the fusion.
The joke may be that fusion is always 30 years way, but there are many things that we now take for granted that society once thought impossible. The famous Norwegian polar explorer, Friftjof Nansen, once said, "the difficult is what takes a little time; the impossible is what takes a little longer." It has been a long road, but the outlook is positive. 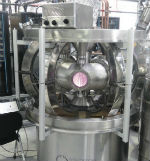 The compact, spherical tokamak created by Tokamak Energy demonstrated a plasma of over 24 hours controlled by high temperature superconducting magnets
Post to: