Between a shield and a hard place

In late May 2012, Dominion's Surry Power Station, one of the older US PWRs, turned 40 years old, and entered a 20-year period of extended operation agreed with the US regulator in 2003. The US Electric Power Research Institute had raised concerns about radiation-induced ageing of materials in the life-extended core barrel, and recommended the inspection of some hard-to-see welds to make sure that the reactor remained intact during extended operation.

During a 10-year in-service inspection, the reactor containment's polar crane lifts out the core barrel with a special lifting rig and sets it down in a stand in the reactor well. Then, among other tasks, remote-control submarines manoeuvre inside the flooded reactor vessel, closely examining nozzles and other key components.

A peculiarity of this generation of Westinghouse PWR is that when placed in its storage stand, the 27ft (8m) high core barrel is 40 inches (1m) taller than the well is deep, so its irradiated flange sticks out of the water. To mitigate this radiological risk, Surry engineers have installed four eight-feet (2.2m) high steel water tanks to ring the pool. Three are lifted into place empty and then filled with water, then the core barrel is moved, and then the fourth is lifted, filled, into position.

The tanks block radiation emitted from the exposed component, protecting workers on the refuelling floor, but at the same time they also block access to the core barrel.

Surry staff designed a circular working platform that sits on top of the water tanks (supported with extra beams) for performing outage work. The platform is built in four pieces so it can fit through the equipment hatch, has two rails -- a handrail and a rail to mount monitoring equipment, so that fall-protection harnesses need not be worn -- and radiological shielding in the flooring. The platform enabled workers to install the inspection tooling in position using the polar crane, and manage associated monitors and cabling.

A mock-up was also designed and built for practice drills and to help smooth the way for administrative clearances.

“When we figured out how tight everything was going to be, [we decided to make a mock-up] just to make sure, and to prove to ourselves, and management, that everything would work," said Dominion civil engineer David Germano.

Like many other vessels, the core barrel consists of steel rings welded together. As part of the material reliability programme, three key welds were to be visually inspected for crack indications: the upper vessel weld, the lower girth weld and the lower flange weld.

The upper girth weld was inspected before the core barrel was moved out of the reactor, by deploying a camera-carrying trolley that rode around the top of the barrel.

The same idea, with some variations, was repeated for the two other inspections using an automated AREVA-designed robot, which consists of a traversing carriage rolling around on the top edge of an outer annular ring called the thermal shield. A vortex suction device keep it upright on the ring. Encoders count the number of wheel rotations, which staff use to measure the position of the carriage. A water jet on the side of the camera blasts away dirt and debris. For the lower flange weld inspection, workers mounted a camera to the device on the end of a long segmented pole.

The most difficult inspection may have been the most important one, the lower girth weld. This beltline weld, which lies at the height of the fuel assemblies, is exposed to the most neutrons, and so another annual ring, the thermal shield, was installed on the outside of the core barrel to help protect the reactor vessel. To inspect the girth weld would require a device less than two inches thick -- 40mm -- to fit in the annual space between barrel and shield. The tool eventually used consisted of a camera mounted on the end of a chain drive. This chain scrolls down vertically like a window blind, deploying the camera inside the gap to the point of the weld.

Inspections at unit 1 and 2 were conducted in round-the-clock shifts over five-day stints in November 2013 and April 2014. The plan is to reuse the equipment and processes for inspecting the core barrels at North Anna 1&2, which has the same design of reactor well, starting in 2017. 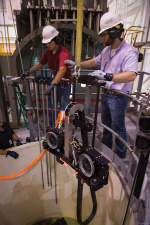