Guidance produced by a cross-industry US collaboration has been successful in eliminating the occurrence of one type of boiling water reactor channel distortion, shadow corrosion- induced bow, since 2011. Ongoing research aims to learn more.

In boiling water reactors (BWRs), a fuel bundle is enclosed in a fuel channel that directs coolant up through the fuel assembly. Distortion of these channels can alter the clearance between neighbouring channels and may restrict control blade movement. More than half of the 35 BWRs in the United States have reported control blade interference due to channel distortion since 2000. The problem surfaced with the migration from Zircaloy 4 (Zr-4) to Zircaloy 2 (Zr-2) channels and longer cycle lengths (18 months). Channels manufactured by all major BWR fuel suppliers have been affected.

Channel distortion can have significant operational, safety, and cost impacts. Operational impacts include periodic testing for control blade friction, which may reduce capacity factors and increase work for reactor operators who must reduce power to move blades and check for interference. Safety is an issue because control blades are the primary means of reactivity control, and channel distortion could potentially prevent control blades from inserting fully during a low-pressure reactor trip. Cost impacts beyond capacity factor reductions may include costs of additional fuel inspections, channel replacement, channel disposal, and less-efficient core designs.

Putting fresh channels on partially-burned fuel assemblies is a costly and time-consuming practice that involves purchase of new channels, extends outage work, and requires handling and disposal of the discarded channels as low-level waste.

Interference due to channel distortion has been less prevalent outside the United States because most non-US plants operate on shorter cycles and therefore do not need to control fresh fuel by inserting control blades into cells that contain new fuel assemblies. However, these plants could experience control blade interference if they transition to longer cycle. This work is helping plants across the world, including Spain's 1092 MW Cofrentes boiling water reactor, which transitioned to a 24-month fuel cycle in 2009.

There are three primary types of channel distortion: bulge, bow and twist. Bulge is caused by irradiation creep of the channel due to differential coolant pressure and occurs primarily at lower elevations of the channel. Bow is driven by fluence or absorbed-hydrogen gradients that cause a differential length change on opposite sides of the channel. Twist results from small geometric differences in bulge and bow that impart a slight rotation to the channel. While all three distortion types can occur, channel bow is the main concern.

The multiple underlying mechanisms responsible for channel distortion are complex and not fully understood, making the phenomenon difficult to predict (see Table 1). The type and degree of channel distortion is alloy-dependent and may also vary depending on plant type, water chemistry, and other factors. In fact, it is not entirely clear why some plants are affected while others are not.

Classic channel bow (that is, fluence gradient bow) is for the most part managed by fuel supplier codes during the core design process. However, a more problematic variant called shadow corrosion-induced bow was observed in the early 2000s with the advent of longer cycle lengths and is driven by differential hydrogen concentrations in the zirconium alloy. Shadow corrosion-induced bow is highly variable due to sensitivity to the distance of the stainless steel from the control blade and the fact that the control blade will lean to one side. Interestingly, symmetric channels will often perform differently.

The mechanism of shadow corrosion is not known. The best description is that it is some type of irradiation-assisted galvanic corrosion between dissimilar metals that only occurs in BWRs. Bow from shadow corrosion arises from the differences in hydrogen pickup of two opposing channel faces. Since hydrogen precipitates above about 50 ppm, the less-dense hydrides distort the lattice and cause growth. With more hydrides under the thicker shadow corrosion film, the channel will bow like a banana. Atomistic modeling has also shown that hydrogen in solution can also distort the lattice, so indeed the absolute difference in hydrogen content is the controlling parameter. Shadow corrosion also occurs on fuel rods at the spacer locations if the spacers are made from Inconel. Water chemistry is known to be important too; efforts to develop a laboratory test using UV light to investigate this parameter have been unsuccessful to date.

Although Zr-2's nickel-bearing precipitates slow down uniform corrosion in a BWR (assuming proper heat treatment), it makes it more susceptible to shadow corrosion than Zr-4. Exactly why this happens remains unclear, despite 40 years or more of experience of shadow corrosion. Not only is Zr-2 more susceptible to shadow corrosion, but also the hydrogen pickup ratio increases dramatically at high fluence, and may approach 100%. So for some reason hydrogen gets into the metal very quickly, aggravating the distortion due to differential corrosion thickness. It is not known why. One theory is that once nickel begins to leave precipitates due to irradiation, those atoms decorate grain boundaries in the oxide, providing a highway for excess hydrogen to enter the metal instead of sweeping out to the coolant during the Zr metal corrosion processes (uniform or shadow).

Early efforts to resolve channel distortion were hampered by proprietary data restrictions that prevented analysis of large data sets necessary to develop improved predictive models for understanding and managing the problem. Recognizing that a broader, integrated approach was needed to address the issue, the US Electric Power Research Institute joined forces with nuclear plant operators, BWR fuel suppliers, the BWR Owners Group, and the Institute of Nuclear Power Operations. These entities collaborated to develop an action plan in 2009 that is guiding near-term and long-term strategies for managing channel distortion. The effort aims to develop more-reliable fuel supplier codes and advanced channel designs with demonstrated advantages.

Collaboration has enabled stakeholders to share data and apply resources to address the issue in a more comprehensive, cost-effective manner than would be possible individually.

Through the collaborative programme EPRI has provided updated mitigation guidance for core design and operational practices. There are a number of things that operators can do to mitigate channel distortion, such as minimizing control blade densities, considering rechanneling and/or migrating to Zr-4 (see box, below). During operation, plants should also establish criteria and procedures to monitor for interference and maintain awareness of the issue. As noted above, the guidance has been successful in eliminating the occurrence of shadow corrosion-induced bow since 2011. The most recent cases of control blade interference are believed to be due to fluence gradient bow in Zr-4 channels.

Another major part of the programme has been the development of an industry-wide database that compiles channel performance and operational information. The database currently includes data from 14 boiling water reactors (including 3 from outside the US), and represents more than 1000 channels. The database contains operational information, poolside dimensional measurement data, hot cell examination results and water chemistry factors. It is used for scientific analysis to better understand channel distortion and to support the development of models for examining significant distortion mechanisms.

Analyses using fuel channel data have resulted in improved models of the various distortion mechanisms, including uniform and shadow corrosion, irradiation growth (for example, fluence gradient effects), and hydrogen pickup. These models provide better predictions for current Zr-2 and Zr-4 alloys and can assist in the development of next-generation materials.

Several poolside surveillance campaigns have been completed and more are ongoing and planned. Since irradiation growth above around 45 GWd/MTU is believed to be the cause of recent interference in US reactors, the current focus of this effort is on high burn-up Zr-4 channels. Campaigns aim to better predict fluence gradient bow so that it can avoided by core design or by rechanneling. Performance data will be important in accurately modeling the phenomenon.

Advanced hot cell examinations are being performed on channel coupons using electron microscopy, atom probe and synchrotron irradiation experiments. This work aims to increase the understanding of corrosion and the level of absorbed hydrogen (hydrogen pickup, which may contribute to bow) for Zr-2 and Zr-4 materials, with and without shadow corrosion. Understanding the mechanism of hydrogen pickup for Zr-2 and Zr-4 is critical to translate understanding for the verification of new materials.

Test reactor experiments are under way to understand the interaction of hydrogen and irradiation growth. Four capsules consisting of Zr-2, Zr-4, and advanced channel materials prehydrided to various levels were inserted into a test reactor in 2011. The first capsule (low fluence) has already completed its irradiation and will be measured in the next couple of months. The second capsule (intermediate fluence characteristic of channel exposure after about four years' irradiation) comes out at the end of 2013. This will be very important to see if the new alloys are more resistant to hydrogen-assisted irradiation growth if that is indeed the cause of accelerated growth seen in both Zr-2 and Zr-4 channels.

Atomistic modeling is improving fundamental understanding of distortion effects of hydrogen and hydrides in irradiated zirconium alloys. Researchers now know that both hydrogen in solution (in the Zr metal) and precipitated hydrogen can cause dimensional changes in the channel material. The modeling also has shown how niobium alloying -- which is used in several of the advanced channel materials -- may reduce irradiation growth. These results almost certainly will apply to zirconium-based alloys in pressurized water reactors as well as those in BWRs. A focus group has been established to suggest new work to benchmark the calculations and map out possible next steps to pursue in 2014 and beyond. EPRI is also collaborating with other industry programmes such as EPRI-managed sister group Nuclear Fuels Industry Research (NFIR).

With the database now sufficiently populated, a state-of-the-art bow model has been developed that can better account for operating experience factors such as control blade exposure and fluence gradients. For example, the model can quantify the effect of the axial distribution of applied differential growth such as might occur from control blade shadow corrosion resulting from different control blade insertion depths.

The modeling effort has already demonstrated improved predictive statistical capability. Additional approaches will be investigated including finite element models to more realistically capture axial effects of uniform and non-uniform corrosion, hydrogen pickup, and irradiation growth, and to account for constraints imposed by actual core and channel geometries. All of these models will be compared to actual measured bow data to improve the capability of predicting channel bow.

As touched on above, all fuel suppliers are moving forward with new alloys as long-term solutions. These new materials are expected to reduce irradiation growth, corrosion, and hydrogen pickup through alloying changes (for example, adding niobium, elevating iron, or eliminating nickel). Fuel suppliers treat these new materials as proprietary. Consequently, the team is working individually with some fuel suppliers to ensure that proposed materials solutions are validated. So far, the available data suggests that these new materials are indeed more resistant to both shadow corrosion-induced bow and fluence gradient bow. However, observations that Zr-Nb alloys may be more susceptible to shadow corrosion than Zr-2 is a concern. Fortunately, the hydrogen pickup is lower so bow is not the immediate concern, but oxide spallation from the thick shadow corrosion films may be. Recall that this was the primary reason to migrate from Zr-4 to Zr-2 in the early 1990s. Hence, while the new materials may solve one problem, a previously resolved problem may resurface without proper validation. 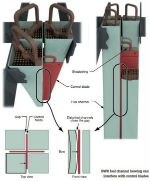