At the cutting edge

Guillotine cutting technology developed for the subsea sector, is proving to be a viable alternative to conventional cutting techniques in hazardous radioactive environments, as Keith Elliott explains.

Cutting steel sections, hoses and other materials is a common requirement during nuclear decommissioning. Work within the confines of a radioactive environment, and the cutting technique options are quickly reduced. Guillotine cutting - a cold process whereby minimal heat is generated and no swarf is produced - is proving to be a viable alternative.

Conventional cutting methods risk airborne contamination that can be difficult to control and they often require an engineer to be present. Hydraulically operated, guillotine-cutting tools are independent of an operator. Time spent in the area is reduced drastically: once the guillotine is positioned and activated the engineer can retreat to a safe distance, reducing radiation dose.

Hydraulic guillotine cutting tools comprise a jaw containing a blade and anvil. The item to be cut is positioned in the jaw and the anvil closed before the guillotine blade is activated. Unlike other cutting methods where there is a risk of the item flexing during cutting, and trapping or snapping the blade, closing the guillotine's anvil locks the metal component in position. Positioning the guillotine, closing the anvil and completing the cut for a steel channel, half an inch thick can take just 2-3 minutes.

Allspeeds supplied Webtool cutting tools to Sellafield Ltd for the removal of steel infrastructure from decanning bays that were previously used to store spent fuel rods and operational waste. The tooling package significantly reduced the time and complexity of cutting steel sections.

Twelve decanning bays adjacent to the main pile fuel storage pond are being decommissioned. Cutting the steelwork as a series of multiple steel sections above and below the water ruled out conventional cutting methods. Allspeeds developed a subsea guillotine cutter capable of slicing through steel channels measuring up to 8in by 4in (203mm x 102mm).

The mechanics of guillotine cutting

The mechanics of guillotine cutting are well understood. The guillotine cutter breaks wires, rods, steel sections or tubes by forcing a wedge (the blade) into the material. As the material undergoes plastic deformation this wedge creates a huge tensile load in the member being cut, and once this tension exceeds the ultimate tensile strength of the remaining material it breaks in two. This describes the traditional blade-on-anvil cutting mechanism. However, there are circumstances where the newly developed blade-on-blade is more appropriate. Here the guillotine action effectively pushes the metal bar between two blades until they meet.

The blade-on-anvil cutting graph (Figure 1) shows the pressure profile during the cutting of steel tube. There is an increase in pressure as the tube undergoes plastic deformation (A). The blade cuts through the first wall of the tube (B). The pressure drops until the blade reaches the second wall of the tube to complete the cut (C).

The graph also illustrates how blade geometry can be optimised to suit the material being cut. Blade A (blue) shows a standard blade, originally designed for cutting steel wire rope. Blade B (red) shows a blade optimised for steel section cutting. The force requirement is much lower.

A large amount of strain energy is released when the cut is completed. This can be mitigated by the choice of cutting mechanism (blade-on-anvil or blade-on-blade), blade material, geometry and speed of cut. It also depends on the application. Structural steelwork is in part restrained by the infrastructure supporting it; an unclamped steel pipe less so. Underwater, the water has damping effects.

The cutting force applied by the blade is related to the hydraulic pressure. How much cutting force is required will depend on the strength, hardness and profile of the material being cut.

Testing assessed the ability of the guillotine to cut without damaging the rods with interval gaps of 9mm, 6mm and 0mm. Initial tests were carried out using a standard ROV wire cutting tool, based on a 10,000 psi maximum input pressure which generated a cutting force up to 37t.

As expected some distortion of the tube ends was observed, which has its advantages in trapping the contents of the section.

The progressive increase in cutting force is due to:

The larger the gap the easier it is for the blade to fit between the bars and rupture the pipe. With no gap the blade has to cut the pipe and wedge between the solid bars.

The cutting force is influenced by the degree of wear of the blade. The blades are coated with titanium nitride. This lowers the friction between the object being cut and the blade. If the surface becomes degraded or delaminated, more force is needed.

A build-up of foreign material on the blade edge will also increase cutting forces.

As the gap decreases, thin slivers of stainless steel are created and form in a line that exactly corresponds to the highest pressure point between the blade and anvil (known as a 'cold weld'). This is due to thin strips of material directly under the blade work-hardening. The ultimate tensile strength of this sliver is higher than the material either side of it. This hard strip is trapped between the blade and anvil whilst the weaker material either side fails due to the tension created by the wedge action.

Where the contents of the tube need to be removed after the cut, the workpiece distortion can be mitigated by using a blade- to blade tool, rather than a round anvil.

In general blade-on-blade cutting is preferred over blade-on-anvil cutting where minimal distortion of the cut profile is required, as shown with the cutting of steel wire rope.

Blade-on-anvil line in Figure 2 represents a guillotine blade cutting against a cylindrical anvil. The tool performing the cut uses 97% of its cutting force capacity. As the wire rope is cut it deforms and spreads individual wires out across the available width of the anvil, which means the entire blade edge is needed to perform the cut. It is this process that drives up the cutting force required and leaves the finished cut section out of round.

Blade-on-blade (blue line) represents a guillotine blade cutting against another blade. The cutting tool uses around 77% of its available cutting force capacity, a noticeable efficiency gain from the blade-on-anvil cut.

The big difference between the cutting methods is deformation of the wire rope section after the cut. As the cut is performed the top blade forces the wire rope down onto the bottom blade. Due to its profile, the individual wires at the base are cut rather than spreading out, which reduces the load on the top blade, lowering the cutting force required and maintaining the roundness of the steel wire section. This makes it easier to re-use cut ropes, for example, threading into a dog clamp or spelter socket.

In nuclear decommissioning, the selection of the tool and cutting mechanism will be based on: the size, profile and orientation of the item to be cut; ease of access; access to sufficient working pressures; and speed of cut.

For the Sellafield project a multi-position lifting frame allowed the cutter to be hoisted into position to cut the steelwork in different orientations. For another decommissioning project, where the levels of radiation precluded human intervention, the guillotine blade had to be replaced using remote manipulation. In this case, a cradle was fabricated allowing the blade and anvil to be removed by manipulating two quick release toggles. 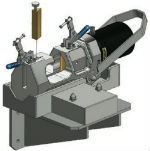 Remote replacement of the cutting tool's blade and anvil is possible 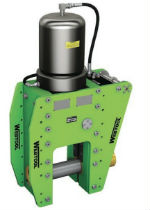 Removal of steel infrastructure from decanning bays at Sellafield
Post to: