Hydrogen water chemistry (HWC) was only introduced into Taiwanese boiling water reactors in 2006. An inspection campaign after about five years of operation has found no evidence of fuel rod damage as a result of the change. By Wan-June Chiu, Shih-Chung Cheng and Yaw-Hwa Shiu

The hydrogen water chemistry (HWC) in BWRs was introduced to reduce the electrochemical corrosion potential of stainless steel and other components and reduce the rate of inter-granular stress corrosion cracking (IGSCC) to these components in 1990s. Currently, HWC has been deployed in all BWRs in the United States, half of the BWRs in Japan and five European BWRs, but it only has been implemented at two BWRs in Taiwan since 2006.

In order to monitor the fuel performance and assure the fuel reliability in the HWC environment, a fuel surveillance programme was executed at both BWR-4 (Chinshan) and BWR-6 type (Kuosheng) nuclear power plants in Taiwan. The programme includes a series of fuel examination campaigns: four at BWR-4 NPP and six at BWR-6 NPP.

Four fuel assembles were examined in BWR-4 unit 1 after cycle 20, 22, 23 and 24. These fuel assembles was chosen based on the irradiation history, the ability to meet project goals and convenience.

In each campaign, visual examination was performed by using either a periscope system or an underwater camera system. Both systems are designed and developed by Taiwan's Institute of Nuclear Energy Research (INER).

The underwater periscope/camera system was installed next to the Fuel Preparation Machine (FPM). The selected fuel assembly was seated on a rotation pedestal, which has been set on the FPM. Through the underwater camera system, the fuel channel surface condition, peripheral fuel rod surface condition, spacer grid and tie plate integrity, were observed and recorded. The related elevation of the fuel assembly was recorded by a digital encoder which was connected to the rotation pedestal. The encoder can provide a digital position output signal and show it on the monitor screen. The accuracy is less than 1mm.

The INEROD system developed by INER was used to measure the oxide thickness. The detection platform installed with standard, eddy current probe and driving system was seated on the working area (above the storage fuel rack). The detection signal was connected to the video & data monitoring and recording system for retrieving and analyzing the measured data. Prior to the examinations, the INEROD system was calibrated and completed its functional tests.

The examined fuel assembly was carried by the loading machine and raised and/or lowered it to the dedicated elevation of each span. The oxide thickness of fuel rods was measured by the eddy current detection system. After finishing all the seven spans of measurement, the fuel bundle was rotated 90 degrees by the loading machine to measure a different face. Two faces of each selected fuel assembly were examined in order to obtain measurements on every rod in the assembly.

Oxide thickness measurements were made on two selected fuel bundles from cycles 23 and 24 of the Chinshan BWR-4. Measurements were performed on each span of the rods, including eight partial-length rods from two faces. Maximum oxide thickness measurements are presented in Figure 1 (red and yellow) with the available data from two BWR-6 surveillance campaigns (green and blue). The results showed a steady but normal increase along with burnup.

The on-site examination results showed that hydrogen addition has no adverse effect on the fuel performance and integrity. The visual appearance of fuel rods, channels and components are consistent with HWC operation. The crud layer deposited on fuel rod surface seems uniform and still exhibits orange-reddish colour. The Zr-2 cladding oxide thickness measurements are normal and indicate no accelerated or unusual growth. In conclusion, no detrimental effect resulting from the hydrogen addition has been found and no impediment exists to continue the HWC operation at BWR-4 NPP in Taiwan. 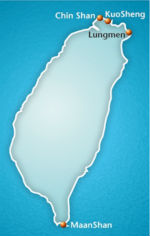 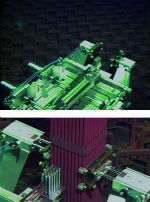