A eulogy for San Onofre

Andrew Benson looks back at energy policy in California and lays out how the state plans to 'replace' the San Onfore Nuclear Generating Station, which supplied almost 7% of Califonia's electricity in 2010. California has a global reputation for its environmental policy. Most notably, the state was first in the US to enact comprehensive legislation regulating greenhouse gas emissions. The law, known simply as AB 32, set a statewide goal of returning to 1990 levels of emissions by 2020 and 80% below that by 2050. Unfortunately, California's ban on the construction of new nuclear power plants in California comes directly at odds with these goals. Enacted in 1976, the law is technically temporary: new construction may resume once the Nuclear Regulatory Commission has approved a method for the permanent disposition of spent nuclear fuel. However, the escapades of the Obama administration have squashed the prospects for Yucca Mountain and thereby the near-term future of nuclear power in California.

"It seems incomprehensible that anyone armed with basic scientific knowledge and a genuine concern for the environment would ban nuclear power yet continue to use fossil fuels."

It seems incomprehensible that anyone armed with basic scientific knowledge and a genuine concern for the environment would ban nuclear power yet continue to use fossil fuels. On any comparison, the environmental attributes of nuclear power are vastly superior to fossil fuels. Nuclear power emits not a single gram of the parade of horribles that waft from the smokestacks of a fossil-fired power plant. By virtue of its astonishing energy density, far less uranium needs to be extracted from the earth than coal, oil, or natural gas to supply the same quantity of energy. The roughly 4000 premature deaths estimated by the United Nations to eventually result from the Chernobyl meltdown is equivalent to a rounding error in comparison to the 3.2 million annual premature deaths attributable to air pollution from combustion sources. Even the death toll of hydroelectricity overshadows that of nuclear power: 230,000 lives were lost and 11 million people were displaced from their homes as a result of the collapse of China's Banqiaohydroelectric dam in 1975.

California's energy in 1976 and today

California's environmental activists, bureaucrats, and politicians have never been cheerleaders for fossil fuels. Yet, what did they think banning new nuclear power plants would accomplish? Their assumption -- essentially a quasi-religious article of faith -- was that energy efficiency and renewable energy could be deployed quickly and reliably to eliminate the need for both fossil fuels and nuclear power. While there is evidence that California's energy efficiency standards have made a substantial dent in demand growth, it has taken over three decades for the renewable half of this one-two punch to even begin to deliver on its promise. Let's consider some statistics:

"Having denied itself nuclear power and not particularly amenable to hosting all the fossil-fired plants needed, California simply exported the environmental problems to other states and imported the power."

But the biggest story is in imports. In the ten years prior to 1976, California had gone from modest net exports to net imports of 50.6 TWh, around one-third of total demand. By 2011, net imports had grown to 89.2 TWh. Having denied itself nuclear power and not particularly amenable to hosting all the fossil-fired plants needed, California simply exported the environmental problems to other states and imported the power.

Only geothermal and hydroelectricity have made substantial contributions since 1976, but both have begun to decline in recent years. Disappointed with the limited market success of solar, wind, and biomass, California's legislators enacted a "Renewable Portfolio Standard" (RPS), simply mandating that utilities serve a specified percentage of their retail sales with renewable energy. Currently, the RPS target rests at 33% by the year 2020.

All the while, nuclear power has been available and utilities were eager to build more (they sued the state for the right to do so). Even despite the ban on new construction and the retirement of three early reactors, the two nuclear plants in construction in 1976 expanded in-state nuclear generation more than seven-fold by 2011, providing 12.5% of the state's total electricity consumption.

The end of an era

2011 marks the end of an era for California. It was the last full year in which San Onofre Nuclear Generation Station operated. Located on the coast halfway between Los Angeles and San Diego, the plant consisted of two pressurized water reactors with combined net generating capacity of 2150 MW. In January of 2012, a small amount of steam was detected in the steam generator of Unit 3. Inspection of both units revealed that the steam generator tubes were showing unusually advanced signs of wear and tear for steam generators that had so recently been replaced. Analysis revealed that the tubes vibrated at just the right harmonic frequency to cause the corrosion.The manufacturer disclaimed liability; the parties have entered binding arbitration to settle the dispute. Ordering another steam generator was out of the question, as the plant's original 40-year license was set to expire in ten years, leaving little time to recover any costs unless a license extension were approved. After plugging some tubes and further analysis, the utility proposed restarting Unit 2 at 70% power as a five-month test. But California's anti-nuclear activists were sharpening their knives for a fight and a preliminary ruling by an arm of the NRC made the prospects of a quick restart dim. The utility decided to throw in the towel in June of 2013. California's environmentalist groups roared with delight.

But quickly, the consequences hit home. Data revealed that GHG emissions from California's electric power sector spiked by 35% in 2012. Of this, 6.75 million metric tons were attributable to the offline status of San Onofre. For reference, this is equivalent to 10% of the GHG emissions California needs to reduce from the peak in 2004 to meet the 2020 target. A decline in hydroelectricity production and continued recovery of demand from the recession also played a significant role. Altogether, these factors left a 41.7 TWh hole in the state's electricity supply, of which a paltry 2.6 TWh were filled by increased renewable generation. Fossil fuels were eager to supply the rest. The independent grid operator recently estimated that the new transmission investments needed to deal with the long-term consequences of San Onofre's retirement will cost on the order of $2.3 billion.

State agencies have agreed on a long-term goal of "replacing" 50% of San Onofre's electricity with "preferred resources" (bureaucracy jargon for energy efficiency and renewable energy). However, every TWh of renewable energy procured will count toward meeting the RPS target. No actual GHG emission reductions will occur that wouldn't have otherwise been required by the law. Furthermore, every TWh of energy efficiency is a TWh that could have been used to replace business-as-usual fossil fuels. The "50% preferred resources" scheme is a half-hearted face-saving mechanism to prevent California's regulatory edifice from having to admit that California's economy and environment are best served by nuclear power. Meanwhile, environmental lobbyists are protesting the numerous natural gas-fired power plants that have been proposed and approved to fill the gap. Despite thirty-plus years of evidence to the contrary, environmental activists in California seem not to have questioned their faith in the adequacy of renewable energy alone to seriously address shortfalls in energy supply.

"The '50% preferred resources' scheme is a half-hearted face-saving mechanism to prevent California's regulatory edifice from having to admit that California's economy and environment are best served by nuclear power."

Looking ahead, independent experts widely agree that the 2020 GHG emissions target can be met despite the absence of San Onofre. But they also agree that either new policies or radical technological innovation are required to ensure that the 2050 target is even possible. Notoriously intermittent solar and wind have accounted for the vast majority of new renewable energy in California and are expected to continue to do so. The economics of GHG abatement will divert essentially all biomass to the transportation sector. EIA projects that US installed geothermal capacity will grow by a paltry 4.8 GW from 2011 to 2040. Hydro will continue its decline in California as the state's water troubles persist. The California Council on Science and Technology framed the problem most bluntly:

If we try to generate 100% of electricity with largely intermittent renewables ... we would need zero emission load balancing (ZELB) technology to work, otherwise emissions from firming the power with natural gas... alone will nearly equal the 2050 emissions target.

To oversimplify for the purpose of illustration, the state will, at a minimum, need to overcome the legal problems with nuclear power related to the requirement for nuclear waste storage, or solve the load balancing problem without emissions for renewable energy.

Intent on high penetrations of solar and wind, California is left with limited options to achieve a reliable 100% carbon-free grid:

California's initial interest in and funding for CCS research is waning. Even with their GHG emissions safely bottled up, fossil fuels remain deeply unpopular with the regulatory and activist elite. Demand response has been pursued as a strategy to mitigate California's peak summer demand, but I suspect California ratepayers aren't going to be very pleased if they find their electricity consumption dictated by the whims of the sun and the wind. That leaves storage. Currently, the costs of most forms storage -- excepting pumped hydro -- are exorbitant. Perhaps R&D will bring them down to a competitive level in a few decades. Rather than wait for the cost-benefit analysis to pencil out, the California Public Utilities Commission has ordered the states' investor-owned utilities to procure storage.

Meanwhile, California will continue to needlessly sideline nuclear power. California's electricity sector will continue to emit unnecessary GHG emissions into the Earth's atmosphere. California's ratepayers will finance an interesting experiment in which a modern society attempts to rely solely on the energy resources that were available to humanity prior to the Industrial Revolution.

The author's father is a 30-plus year reactor operator and nuclear engineer of San Onofre Nuclear Generating Station.
You can follow the author on Twitter at @A_G_Benson. He blogs at www.atoms4ca.tumblr.com 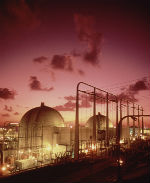 Castaic Pumped-Storage Plant. Operated by LADWP it is the largest pumped storage project in California generating 1275MW.
Post to: